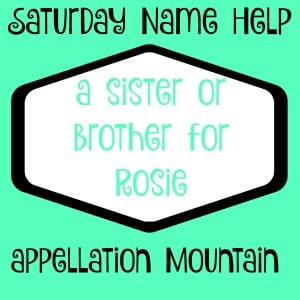 We are adopting our second child. We have been waiting for about a year and are hopeful the baby will come soon. We named our first daughter Rosemary Louise Marie.

Rosemary and Louise are after my husband’s grandmothers and Marie was requested by her birth mother. Her nickname is Rosie. We are very happy with her name – it fits her happy and energetic personality.

We have a very common last name that starts with J.

We like names that sound familiar to people but are not too common. My husband grew up knowing multiple people with his exact name. My name is pretty rare so the idea of someone having my exact name is unnerving.

Susannah – But are afraid Rosie and Susie would be too cutesy and Annie/Anna too common?

Junia – But I think June is about to become really popular.

Laurel – But Laurel Earlene is a little heavy on the Ls.

We find boys names even more difficult. We like Elias and Beckett, but both names are far too common. We’ve considered Reuben – but what if we have a third child and feel stuck with R names? Matthias is also a possibility.

One final consideration: our daughter is biracial, and our future children are likely to be biracial or black, too. We’re trying to be sensitive to that.

Read on for my response, and please share your helpful thoughts and suggestions in the comments!

I’m struggling with girls’ names because it seems like Rosemary and Susannah are exactly right together. Everyone’s heard of both names, but neither is at all common. And while Rosie and Susie don’t seem too close, I understand your hesitation. Rosie and Susie are awfully cute together – and that might not be desirable in another seven or eight years!

Annie and Anna are great alternatives. While Anna is more common – both among all women living today, and among girls born in recent years – I don’t know that it’s so popular that it should be ruled out. In 2014, there were over 1.9 million newborn baby girls born in the US. Only about 5,600 were named Anna, compared to over 20,000 newborn Emmas. Of course, Anna and Annie are more steadily used over the generations, which may make the names feel more popular. And if you know a 30-something Anna and 70-something Annie and a toddler called Annie, then I’m just wasting my breath.

But if it’s just fear of popularity, it might be worth reconsidering, because it’s a great fit, and Susannah Earlene actually sounds all kinds of gorgeous.

One other unconventional nickname thought: Zuzu. In Slavic languages, Susan tends to be spelled with a Z, making Zuzu a rare, but not unknown, nickname for any of the related names. (The youngest child in It’s a Wonderful Life is George Bailey’s daughter, Zuzu.)

Or maybe Susannah isn’t The Name, and we should move on. More thoughts for girls:

Jessamine – It’s an older form of Jasmine, which means it’s every bit as botanical as Rosemary. Jessamy is also sometimes seen. Nicknames include Minna, Jem, and Jessa, or maybe even Mimi. While the name is long and elaborate, it has a tailored quality, too. Rosemary and Jessamine, Romy and Minna. I think they work beautifully together, and Jessamine Earlene is rather lovely.

Isadora, Isabeau – Both names are often suggested as substitutes for the very popular Isabella. Neither has caught on – but that’s a good thing in this case. Isadora brings to mind the dancer, Isadora Duncan. Isabeau is a seldom heard form of Elizabeth and Isabelle. Either name could be Isa for short, and Dory or Beau/Bo work, depending on which name you choose.

Theodora – Theodore and Theo are gaining for boys, and Thea is on the upswing for girls. Theodora remains rare, but it’s a traditional, nickname-rich name. Besides Thea, there’s also Thora, Dora, and Teddie.

Helena – Helena is currently just outside of the Top 500 in the US, which is pretty uncommon. (As of 2014, Rosemary ranked #574.) One of the possible hesitations with Helena is choosing a preferred pronunciation – there’s more than one! I’m guessing Earlene sounds like lean and jeans, which might be too close. But if you pronounce Helena so the len rhymes with main or den, it’s not an issue.

Simone – This isn’t an obvious match for Rosemary, but I like the idea of Simone. Even though plenty of French names for girls are very stylish right now, Simone has been falling out of use over the past few decades – and has never been especially common in the US. It brings to mind a range of women: Nina Simone, Simone de Beauvoir, the Olympic gold-winning gymnast Simone Biles.

Marianna – I heistate to suggest Marianna, because you might have the same hesitations as with Susannah – is Anna/Annie too popular? And yet, Marianna could shorten to Mari, Mia, Mare, Mara, Ria … and probably many more.

Now, if your second child is a boy, oh boy golly! There are plenty of familiar, but not too common names. And plenty of them seem like brother names for Rosemary – that is, they’re more traditional than novel. But somehow, every name that pops into my head starts with an R! Reuben is great, and then I thought of Raphael or Robinson or … nevermind. While I don’t think two R-named kids means you’re stuck, let’s try to find some great names that start with one of the 25 other letters of the alphabet!

Gideon – Since Rosemary is a longer name, I started by looking at longer names, too. Savion, as in the dancer-choreography Savion Glover, might come across as trying too hard to find a culturally sensitive name. But Cameron feels much too mainstream. Is Gideon the right note? It’s an Old Testament hero name, and while it has a long history of use, it’s never been terribly common. Though it is currently in the mid-300s in the US and rising, so maybe Gideon doesn’t quite work, either.

Dashiell – Now Dashiell, I think, does. Dash is a great nickname. (And I love the names together. Rosie & Dash sounds like an upscale children’s boutique!) Literary and rare, Dashiell was given to just 123 boys in 2014.

Phineas – Phineas reminds me of Matthias, which I think makes for a great name. Matt might be a little too plain of a short form to satisfy. Though I think you could use Ty for Matthias, too. Wait – where was I? Right, Phineas, called Finn. Depending on where you live, Finn is either everywhere or just slowly catching on. We know a few, but not enough to consider it an epidemic. The many different formal names – Finley, Finnegan, Fintan – obscure the popularity of Finn. A positive that can also be a drawback? Finn is one of the heroes in the new trilogy of Star Wars films, played by John Boyega.

Dexter – Because you have Beckett on your list, I’m assuming that you like the idea of surname name for boys. Dexter is one of my favorites. It’s sort of clunky-cool in full, but Dex is an edgy nickname in the key of Jax. That makes Dexter versatile. It strikes me as vaguely British, but not necessarily white – maybe that’s thanks to the EastEnders character played by Khali Best, or possibly Jason Momoa’s character in Stargate: Atlantis, Ronon Dex. Though my favorite Dexter will always be one played by Cary Grant in The Philadelphia Story, and, of course, some parents hesitate because of Dexter Morgan, the psychopath at the heart of Showtime’s hit series.

Hayes – Hayes is one of those surname names that made my Preppy Hellraiser names list. It’s buttoned down, but with an edge. It’s in the US Top 1000, hovering in the 500s, which makes it comparable to Rosemary’s popularity. There’s no obvious nickname for Hayes, but I think it hits the right note in terms of style and popularity.

Ellis – Ellis is a surname name ultimately related to Elias, which is probably why it keeps popping into my head.

August – Is August too popular? It’s about as common as Beckett, but playwright August Wilson comes to mind, illustrating that this name is traditional but versatile, which seems like the right note for your family.

Lucian – I was initially thinking of Leonardo or Luciano, because romance language names are culture-spanning choices. But Lucian is less popular than both names, while offering the option of a shorter name, like Luc/Luke.

You know what? I could keep going. I think the pool of possible boy names is deep – even without considering the letter R!

Overall, I do think that Susannah and Reuben are great choices for your next child. But from my lists of alternatives, I’m most drawn to Dashiell, nickname Dash, for a boy. And for girl? I keep coming back to Susannah, though I think that Marianna might be a first name with a few more nickname options.

Readers, what names would you suggest to Mommy J and her family?