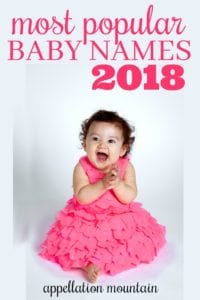 The most popular baby names 2018 update is here!

The US Social Security Administration has released all of the data for births from January 1st through December 31st of 2017.

What jumps out first?

As I mentioned yesterday, we don’t often see big changes in the Top Ten. But this year proved more exciting than the last few reveals.

The Top 100 is ever-changing, and this year was no exception.

Why do the most popular baby names 2018 matter? One thing always strikes me: if you love baby names, you read about them all the time, and you’ve probably developed good radar for what’s a rising – or fading – name.

But the majority of people first ponder names around the time they start a family. Newcomers to the name game turn to lists – or articles and vlogs and books informed by those lists. And so a name that makes the Top 100, for example, probably attracts their attention, simply because everyone is aware of it. Even media outlets that cover such information only casually will often focus their name coverage on these names.

In fact, it creates a funny loop. First time parents – especially those who don’t yet know many families with young children – will perceive names like Lincoln or Paisley as fresh and new. And they are! No one had those names back in the 1990s, when today’s parents were in kindergarten. Except they’re not, because of course they’re Top 100 picks, well established for children born in recent years.

What strikes me most about this list? As parents search for names, the influence of pop culture is dramatic. Logan’s spike into the US Top Ten is one example. The debut of Dream in the Top 1000 is another good example. In many ways, this is nothing new – we’ve always taken our children’s names from the wider culture. But it’s faster today, with names rising and falling in response to dozens of trends. At the same time, it’s splintered – because there are more sources competing for our attention than ever before.

More on the Most Popular Baby Names 2018 coming over the next few days and weeks! But for now, tell me: did anything jump out at you from today’s new list? 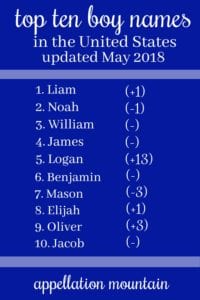 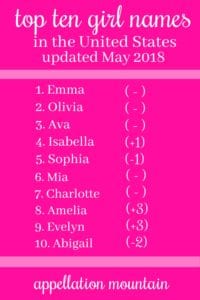