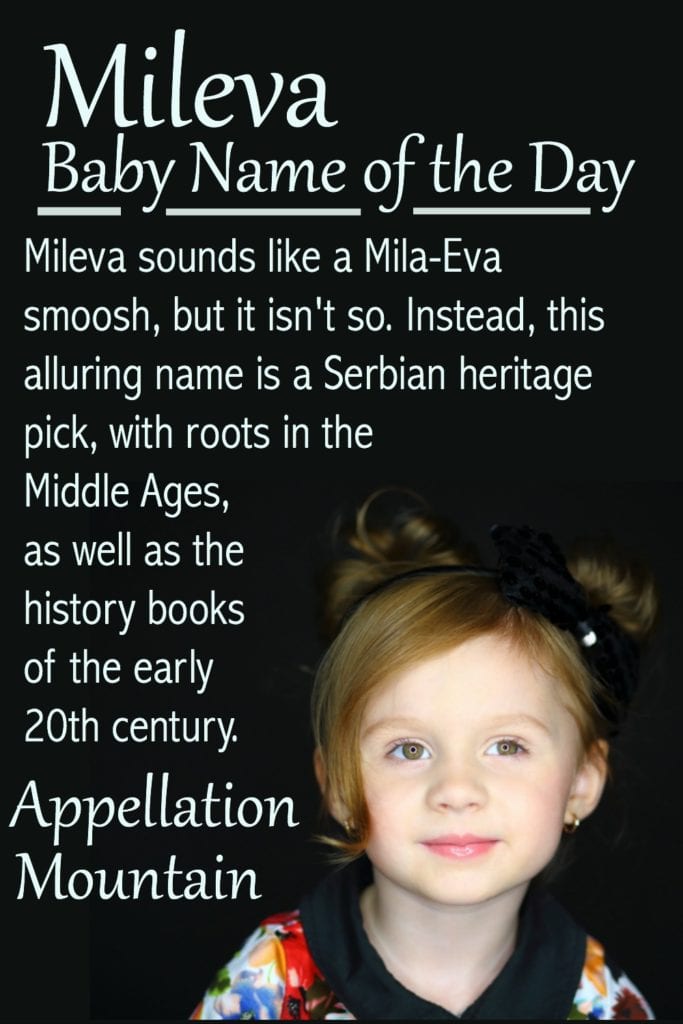 Here’s a rarity that I stumbled across while researching Despina: a lovely Mila-Eva mashup that could wear well in 2016.

Our Baby Name of the Day is Mileva.

The first instance of this name – at least the first one that I found – was the daughter of Lazar of Serbia, sometimes known by her middle name, Olivera.

She married an Ottoman Sultan in the late fourteenth century. A number of similar marriages took place, uniting dynasties across religious lines.

Her given name disappears after marriage, when she becomes known by the title Despina Hatun.

But her birth name drew me in, especially since her mother was Milica. The first syllable comes from the Slavic milu – gracious or dear. You might also think of Milena – Mila Kunis was born Milena. It occurs at the end of names, too, like Radmila.

You might think of another bearer of the name: Mrs. Einstein.

I can’t confirm if the name was in steady use from the fourteenth century right up through the nineteenth. But we do know that Serbian-born Mileva Marić studied at Zurich Polytechnic with Albert Einstein. She studied mathematics and physics before marrying her former classmate in 1903. They had two sons together, but their marriage ultimately ended in divorce.

She must have been brilliant. While her family’s wealth and connections fostered her ambitions, Maric enrolled in schools almost exclusively reserved for men.

Her life, post-Einstein, proved difficult. Their younger son suffered from serious health problems, and Maric devoted her life to the care of her children.

Some contend that Maric’s contributions to Einstein’s work were so significant that she deserves credit for many of his early achievements. However, Maric herself made no such claims.

There’s a 2002 play and a 2011 opera based on her life, the latter written by Serbian composer Aleksandra Vrebalov.

I’m guessing this must be a Serbian heritage choice. Nearly every Mileva I’ve found appears to be of Serbian descent.

Then again, there are only a handful.

US Census records from the 1920s through the 1940s list a few dozen. Most of them list Yugoslavia as their birthplace – a country that existed only during the twentieth century, and has since dissolved into several separate countries, including Serbia. A few others come from other Slavic countries, like Hungary and Albania.

It’s possible that this is just a twist on Milena, swapping the -ena for an -eva. If that’s the case, I can’t determine why it would be specific to Serbian, when so many other Mil- names are used in many Slavic languages.

Or maybe Mileva caught on in the late nineteenth and early twentieth centuries, and has since faded into obscurity, the equivalent of Mildred or Gladys in the US.

Mileva: By the Numbers

What I do know is this: there have been more than five girls given the name in a single year in the US. In fact, there was only one year when there with five births – 2014.

Perhaps American parents dropped Mileva in favor of more mainstream choices, like Millie or even Mildred. Or maybe it just wasn’t very common to begin with, and so it was easily forgotten in the US.

The curious thing is that if Mileva didn’t already exist, if would be tempting to invent this name. It’s a smoosh of Mila and Eva, a spin on Ava and so many Mil names. The good news is that might make it wearable, even if you can’t claim descent from Serbs – or aren’t a physicist.

If you’re looking for a rare name for a daughter, this is one that belongs on your list.

Would you consider Mileva for a daughter?