Mattie sounds like a nickname-name in the key of stylish choices Frankie and Sadie.

Thanks to Beth for suggesting our Baby Name of the Day. (I think this is our very first suggestion via Instagram!)

In our age of Madison and Madelyn/Madeline/Madeleine, it’s no surprise that this name sounds feminine. Maddie names have dominated the US Top 100 in recent years.

But it has history as a masculine nickname for Matthew, too – especially in Ireland.

Of course, it would make a logical nickname for Matilda, Mattea, Martha, Marta, Martina, Margaret, or many of Margaret’s many international variations.

History gives us a few women by the name, including Florida judge Mattie Belle Davis, one of the first women to hold that office in the US, and gospel choir director Mattie Clark. The Clark daughters went on to become bestselling gospel singers under their mother’s direction.

Then there’s the first Mrs. Earp, born Celia Blaylock, but known as Mattie.

Miss Blaylock met the famous lawman sometime in the early 1870s. She’d run away from strict parents and Iowa farm life, ending up as a prostitute in the Wild West.

The second Mrs. Earp, Josephine, went to great lengths to conceal her predecessor from official biographies. But Mattie can be found in US Census records, as well as memoirs from the era. 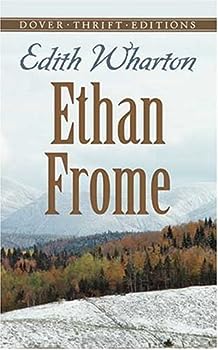 The best known bearers of the name are fictional.

First up: the young and lovely Miss Silver from Edith Wharton’s 1911 novel Ethan Frome. Wharton’s Mattie is a cousin, sent to help care for the ailing Mrs. Frome. She and Ethan fall in love, but it cannot be – and tragedy follows. It’s a bleak and sorrowful tale.

Patricia Arquette played the character in the 1993 movie adaptation, with Liam Neeson as the title character.

If you’ve seen True Grit – either the 1969 original or the 2010 remake – you have another reason to associate this name with the Wild West.

Based on a 1968 novel, True Grit is the tale of a feisty farm girl named Mattie Ross. She hires a lawman to help her hunt down the outlaw who killed her father.

The 1969 version starred John Wayne as Rooster Cogburn as the lawman, and Kim Darby as the determined Miss Ross. Wayne won an Oscar for the role.

In 2010, Hailee Steinfeld was the daughter, while Jeff Bridges attempted to fill John Wayne’s boots. Bridges and Steinfeld both earned Oscar nominations for their work, and the movie was also nominated for Best Picture. 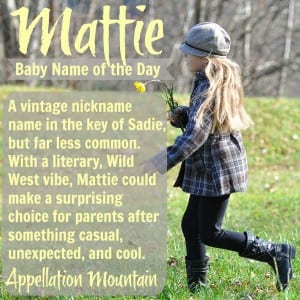 A handful of other uses include characters in August: Osage County and the original British version of House of Cards. (In the American remake, she’s renamed Zoe.) It’s also the nickname for Martha Franklin, one of Marvel Comics’ versions of Spider-Woman.

But despite the literary and pop culture ties, the name has never been anywhere near as popular as it was way back in the nineteenth century. That could make it a great choice for parents after something unexpected, casual, and cool.

What do you think of Mattie? Does it work as a stand-alone name, or would you use it only as a nickname?