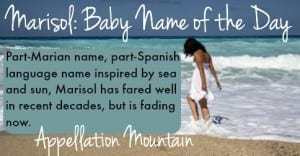 Is it a modern nature name extraordinaire or a name honoring Mary?

Thanks to Kathleen for suggesting Marisol as our Baby Name of the Day.

The title refers to Mary alone on Holy Saturday after the death of her son, Jesus.

I’ve read that Queen Juana of Castile and Aragon became especially attached to Our Lady of Solitude after the death of her husband, Philip.

That was the early 1500s. I can’t find references to the title that pre-date Queen Juana’s broken heart. And yet, I’m not sure the story holds up to scrutiny – though the title seems to have developed not long after the sixteenth century.

Regardless, Maria de la Soledad is considered a Marian name. Contract the name and you’ll have Marisol.

Marisol could have another origin. Spanish. Smoosh together mar y sol – sea and sun in Spanish – and you’d also arrive at this name.

One reason to think that some of those Marisols are nature-inspired? Maria Sol is also found as a double name, and also smooshed to Marisol.

Venezuelan sculptor Maria Sol Escobar became part of Andy Warhol’s circle, starring in two of his movies in the 1960s. She dropped her last name, and was known simply as Marisol.

In recent decades, Marisol has become a given name in its own right, though it’s difficult to know how many Marias might have answered to Marisol over the years.

Spanish singer and actress Maria Josefa Flores became a child star as Marisol in the 1960s. She seems to have boosted the name in the US. In 1953, there were just seven girls given the name in the US. By 1962, the name was in the US Top 1000 – and has remained there ever since.

The name was boosted by Mexican telenovela Marisol in 1996, when the name peaked at #234 in the US.

Ten years later, Marisol Luna was the American Girl Doll of the Year in 2006. The name rose slightly, to #321. 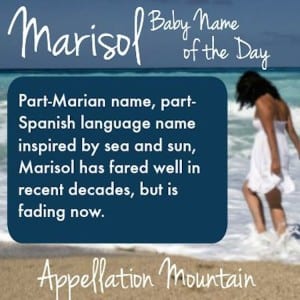 Marisol fits with so many current trends: it’s a tailored name for a girl, and certainly could be a nature name. Spanish-English crossovers, like Isabella, Sofia, and Mia, have fared well in recent years.

This fact leaves me uncertain. Is Marisol dated, the Spanish-language equivalent of naming your newborn Jennifer? Or is this the perfect moment to use Marisol as a crossover name – less frilly than Isabella, but every bit as Spanish. It’s a lovely name that hits many of the right notes, so Marisol could make a great, culture-spanning choice in 2015.

What do you think of Marisol? Is this name headed for obscurity?