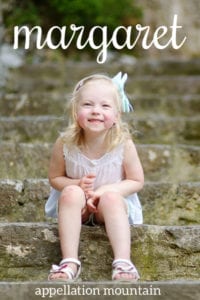 Classic Margaret feels rock-solid traditional and just a little on the uncommon side.

Thanks to SoPeJo for suggesting our Baby Name of the Day.

No question that Margaret belongs with classic girl names. It offers regal and saintly bona fides to rival even Katherine and Elizabeth.

The future Saint Margaret of Antioch was born the daughter of a pagan priest sometime in the late 200s, converted to Christianity, and defied all expectations by refusing marriage.

As was the custom of the day, the defiant daughter faced torture. Here our story takes a turn towards the fantastic. Satan, legend tells us, appeared in the shape of a dragon and swallowed the girl whole. But the cross she wore allowed Margaret to escape from the belly of the beast, unscathed.

Odds are most of this story is sheer fancy – certainly that bit about the dragon. But medieval favorite The Golden Legend relates the whole thrilling tale.

In the Crusader era, parents were curious about all things eastern – including Antioch, now part of modern-day Turkey.

Today it feels like a traditional, even sensible choice. But more than a thousand years ago, I suspect it seemed glittering and exotic.

Even if the dragon-defying maiden of the ancient world wasn’t real, many other saints by the name followed. That includes Saint Margaret of Scotland, born an English princess, married to King Malcolm III, and known as the Pearl of Scotland for her charity and piety.

The Scottish saint’s nickname didn’t come out of the blue.

In Greek, margarites means pearl, ultimately from an older Sanskrit or Persian word.

The fame of the original saint spread the name throughout Europe. In French, it became Marguerite. And, because the daisy flower was compared to a pearl, marguerite became the French word for daisy.

Marguerite de Navarre, sister to the future French king Francis I, a skilled diplomat, accomplished writer, and friend to Erasmus and da Vinci, used the daisy as her personal symbol.  So did Margaret of Anjou.

They probably didn’t dream it up themselves. A handful of earlier writers made the connection.

Centuries of reinforcement make Daisy a playful nickname for Margaret.

Other options evolved over time, too. There’s Meg and Peggy, Greta, Madge, Maisie, Maggie, and Margot – to name just a few.

Margery is simply the medieval English version of the name, just like Cecilia became Cecily and Maria turned into Mary.

RETURN TO THE TOP?

Plenty more Margarets – real and fictional – keep this name in the spotlight. There’s comedian Margaret Cho, for one. Many of us grew up with Maggie Simpson, and maybe Judy Blume’s tale of teenage angst, Are You There God? It’s Me, Margaret. The Marvel Universe has given us the formidable Agent Carter, and while she’s called Peggy, we know this is her real name. The same is true for Meg Murry from A Wrinkle in Time, and too many more to list.

And then there’s Queen Elizabeth II’s flamboyant younger sister. She appears in Netflix series The Crown, played in recent seasons by the scene-stealing Helena Bonham Carter.

Of course, that list pales to the many real-life women with the name. After so many years’ use, odds are that your family tree includes a Margaret or two, too.

Lately the name has staged a quiet comeback. Maybe it’s an alternative to wildly popular classics like Charlotte and Eleanor. Maybe it’s the draw of so many nicknames. Or perhaps it’s simply time for this traditional pick to return to the spotlight. It’s climbed from #178 in 2008 to #127 in 2018.

But for now, it’s still a classic on the slightly less common side.

What are your favorite classic names for girls? Would you use a nickname for Margaret, or do you like it best in full?

Originally published on December 4, 2012, this post was updated substantially and re-published on February 13, 2020. 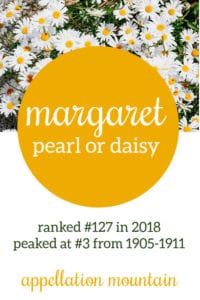