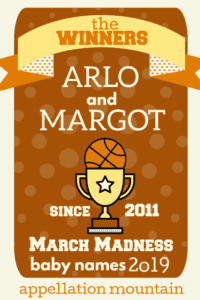 March Madness baby names 2019 has drawn to a close, and it’s time to announce the winners.

Please join me in congratulating Arlo and Margot, the newest members of our March Madness baby names’ champions circle.

The final match-ups were plenty exciting:

Arlo and Margot join past winners:

You’ll note that Cora defended the title in 2015; after that happened, all past March Madness baby names champions were disqualified from future contests.

In the ninth year of competition, it’s fair to say that there’s a definite style for March Madness baby names winners. They’re familiar, but not Top 25. (Or even 100, at least not at the time of the contest.) They’re often names on the upswing, rising in use in the following years. And even though some wild, out-there names always appear in the opening rounds, that’s never where the contest ultimately takes us.

The names that win feel like crowd-pleasers – and I guess that makes sense.

This year’s pair feels even closer than some. They share a strong ‘ar’ sound and that bright, upbeat ‘o’ ending. In fact, they’re probably a little too close for sibling names.

And yet, I’m guessing most of us could happily name a child from this small list of names. (Or maybe many of us already have!)

Our tenth year of competition kicks off on Saturday, March 7, 2020. Between now and then, we’ll have more contests – the fourth annual New Names Showdown in July; October’s third round of the Great Halloween Baby Names contest; and a second edition of the Favorite Celebrity Baby Names contest to round out the year!