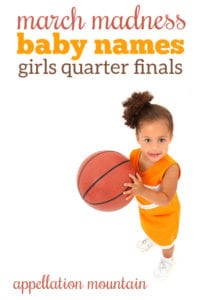 March Madness baby names has never been so exciting!

The girls’ opening round ended with an actual, vote-for-vote tie in one of the contests.

Some of the results surprised. Others turned out exactly the way I’d imagined.

Now it’s your turn to vote once more. But before we get to it, let’s review the results from the Opening Round.

And so now we have our eight names that advance to the quarter finals!

We’re looking for your favorite in each of the match-ups. Define favorite as you like: the name you’d be more likely to give a child, or maybe the one that you’d be most thrilled to hear in public.

Past winners go back to 2011: Louisa, Genevieve, Isla, Cora, Sylvie, Wren, Eliza, and Margot. (If you’re thinking that the numbers don’t quite add up, you’re right. Cora won back-to-back victories 2014/15, so we decided that past winners can’t defend their titles in future years.)

Got all that? It’s time! Voting is now open for March Madness Baby Names 2020: Girls Quarterfinals!

Voting stays open through Thursday, March 19th. Check back on Saturday, March 21st to see which names advance. And, of course, to vote for your favorites in the SemiFinals!