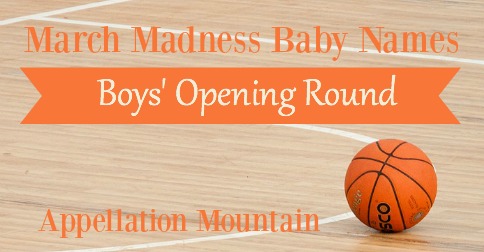 It’s the first Saturday in March, and that means it’s time for March Madness Baby Names 2016 at Appellation Mountain!

This is the year six of competition, and the first year that prior March Madness winners are expressly excluded from defending their titles – though in the boys’ case, no name has ever repeated.

Past year’s winners are as follows:

All of those names are excluded from competition going forward, but plenty of names are back, ready to win the 2016 title. Soren, Koa, Atlas, Rafferty, Elliot, Emrys, Shepherd, Sullivan, and Beckett were all in the 2015 tournament, too!

Wondering how a name makes it to the sweet sixteen? It’s pretty simple: I look at page views for the calendar year ending on December 31, 2015. This year, I had to drop past winners Everett and Finn, so the names with the 17th and 18th most-viewed names taking their places.

This makes for a quirky list, of course. Some posts are popular because few  other sites cover the names in-depth. Sometimes a popular post on Pinterest pushes a name into the top page views, even though the name itself isn’t really on the rise.

And yet, I do think the names that advance in the competition tend to be great names that are often trending. That’s certainly true of the past winners.

Now that we’ve got all of that out of the way, let’s vote! 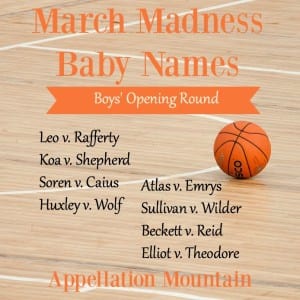 The regal Leo versus the raffish Rafferty

The battle of the s-ending names: Atlas versus Emrys

And last, but not least: Elliot versus Theodore

Voting stays open through Friday, March 11th. Check back on Saturday, March 12th to see the official results – and to vote in the next round!