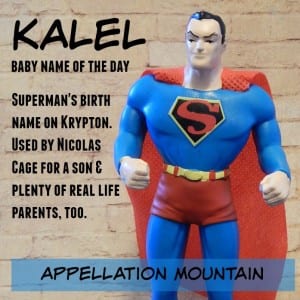 Our Baby Name of the Day is Kalel.

We borrow lots of names from fiction, even scifi and fantasy. Anakin and Atreyu, Arwen and Khaleesi.  None of those have made it into the US Top 1000 yet – though Game of Thrones certainly deserves some credit for the rapid rise of musical Aria.

Kal-El is the name given to Superman at birth.  If you don’t know your superhero origin stories, it goes like this: Jor-El and Lara have a very young son on the planet Kyrpton.  Jor-El is a brilliant scientist, and foresees the planet’s destruction.  The couple saves their son by sending him to Earth in a tiny pod spacecraft.  The Kent family finds the infant, and raises him as Clark.

You know the rest of the story: he grows up to become mild-mannered reporter Clark Kent, never in the same room when Superman saves the day.

Superman was a long-running comic and a television show before it became a smash hit movie in 1978.  It’s been rebooted and reinvented along the way, with television’s Smallville exploring Clark’s life growing on the Kansas farm.

According to Smallville, Kal-El means star child in Kryptonian.  I couldn’t find the reference in any other Superman works, but maybe it’s there.

For years, it was rumored that Nicolas Cage would star in a new version of a Superman film.  Tim Burton spent the better part of 1997 working on Superman Lives.  Kevin Smith wrote the first draft of the screenplay.  But it never happened.

Instead, Nicolas Cage married Alice Kim in 2004.  A year later, the couple had a baby.  And they named him Kal-El.

Kalel: The Case for the Name

Everything about this story is pretty outlandish.

It’s not just a fictional character’s name – it’s a complete invention, with an etymology from an invented language.

Except, Kalel hits a few notes that make it seem less ridiculous:

And yet, Kalel’s use is deniably tied to the Man of Steel.

In 1996, Lois & Clark: The New Adventures of Superman was on television, and nine boys were given the name Kalel.

We’ll have to wait for the 2014 data to learn if Kalel is climbing, or if this name will fizzle.  For the moment, though, the name of Krypton’s favorite son is having a good moment here on Earth.

What do you think of Kalel? Does it seem impossibly tied to Superman? Or do you think this name could evolve to be more than a comic book hero?