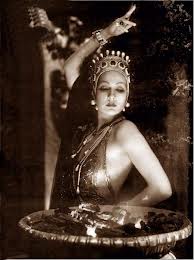 Invented names can have a surprising amount of history behind them.Thanks to Helen for suggesting her grandmother’s unusual name for our Baby Name of the Day: Joyzelle.

Helen’s great-grandmother gave the name Joyzelle to her daughter in 1926.  They were from a small town in Texas.  Years later, when Helen asked her beloved grandmother about her name, she was told that Joyzelle had been invented because she’d just loved the sounds.

Maybe so.  We’ve been cobbling together names from appealing sounds since the beginning of time.

But then again, maybe not.

Because Joyzelle was having a moment in Hollywood right around the time Helen’s great-grandmother was thinking about baby names.

Joyzelle Joyner was a Hollywood actress in the 1920s and 30s.  It appears that Joyzelle was her given name when she was born in Alabama in 1905 – more on that in a minute.

Joyner’s biggest role came in 1932, when she was cast as Ancaria in Cecil B. deMille’s epic, The Sign of the Cross.  Ancaria was a temptress who performed the provocative Dance of the Naked Moon, wearing not very much at all.  (This would be a hallmark of Joyner’s most notable roles.)  She had a tumultuous first marriage, too, to a husband who was hoping for a domestic goddess, not a big screen siren.

It wasn’t just Joyzelle’s hubby who objected.  Church leaders and politicians were fretting about big screen debauchery and its influence on future generations.  By 1934, the Motion Picture Production Office was enforcing standards that would remain in place for years.  Criminals must end badly, everyone had to keep their clothes on.

But where could Joyner’s parents have found the name in the first place?

Maurice Maeterlinck was a Belgian-born poet and playwright.  You might recognize his name – he won the Nobel Prize in Literature in 1911.  A few years earlier, he wrote a play called Joyzelle.  It was first performed in 1903, and was published the same year.  It’s a love story, one with an enchanted setting and a happy ending.  It was performed in New York by June 1903.  There are hints that Joyzelle and Joyselle saw some use in the era, meaning that Materlinck may have borrowed it, too.

Others were using the name, though in small numbers:

Joyzelle could have succeeded on sound alone.  Joy was catching on in the 1920s and 30s.  So were ends-with-zel choices, from Hazel to Mozelle to Rozella.  Add in starts-with-zel names like Zelma, Zelda, and Zella, as well as a bumper crop of -elle names – Estelle, Annabelle, Marcelle, Maybelle – and Joyzelle was in step with her historical era.

Overall, she makes for a fascinating name – a little bit literary, a little bit Hollywood, with a surprising, vintage sound.