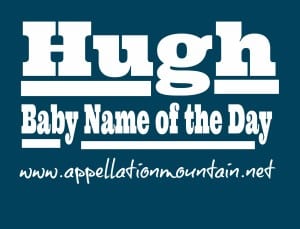 Worn by a French king and an animated duck, this name has oodles of history.

With a happy birthday to my brother-in-law, our Baby Name of the Day is Hugh.

Hugh was definitely in use by the 900s.  That’s when Hugh Capet became King of the Franks, and founder of the Capetian dynasty.  Capet was descended directly from Charlemagne himself, the grandson of a German king and son of a French duke, also named Hugh.

The name comes from the Germanic hugu – mind, soul.  It became Huguo, Hue, and Hugues and the meaning morphed, too, picking up the sense of heart or spirit – a thoroughly appealing possibility.

Plenty of Norman families used this name, and they brought him to England, where he was common throughout the Middle Ages.

You’ll find him in Scotland and Ireland, too, where Hugh was used as an equivalent of names like Aodh.

Fast forward to the nineteenth century, and Hugh was a Top 100 choice in the US.  Playboy magazine magnate Hugh Hefner was born in 1926, published his first issue in 1953, and has rarely been out of the headlines since.

More recently, the name has been worn by some very dashing leading men, including Hugh:

One of his shortcomings could be nickname options.  Hughie and Huey bring to mind controversial politicians – former Louisiana governor Huey Long was born Huey, not Hugh – and 1980s pop band Huey Lewis and the News – the frontman was born Hugh.

More promising is the Latinate form of the name: Hugo.  With his bright ‘o’ ending, an intriguing novel – The Invention of Hugo Cabret – and an Oscar-winning film adaptation, Hugo has held steady in the 400s in recent years, and feels like he has potential.

The spelling Hew is a valid variant, and Hue is another word for color – but without meaningful history as a given name.

Overall, Hugh hits a sweet spot – a name well-used throughout history, but seldom heard in the US today.  If you’re after a familiar, but uncommon choice for a son, Hugh is one to consider.