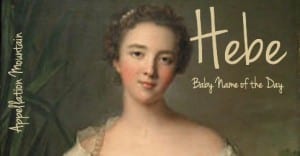 It’s a mythological name with the same ending as current favorites.

Thanks to Sarah for suggesting Hebe as our Baby Name of the Day.

Hebe: Daughter of the Gods

The goddess Hebe is the daughter of Hera, and her dad is usually listed as Zeus. Despite her parents’ high rank, her tasks can appear menial. She serves as the cupbearer, bringing nectar and ambrosia to all of the gods. And she helps her mother into her chariot. When the Olympians were re-invented as as Marvel Comics characters, Hebe put down her cup to serve as Hera’s secretary.

Hebe’s powers were significant. She’s the goddess of youth, able to bestow eternal youth on others. She’s sometimes depicted as an eagle, a bird the Greeks believed had phoenix-like powers of regeneration. She was also associated with forgiveness.

The goddess eventually married Heracles, but compared to the average Olympian, the stories about her are low key.

The trend may have started in France, where aristocratic women were depicted as Hebe in their portraits as early as the 1730s. Before she became queen, Marie Antoinette was painted the white flowing dress of the goddess – “en Hébé”- in 1773. Not long after, the French Navy applied the name to a class of ships.

The trend spread to England and throughout Europe, eventually reaching America. Sculptures are common, too, and many remain in museums and public spaces.

Despite the fashion in France for depicting women as the goddess, it’s not known as a name in France today.

It is known as a genus of plants native to New Zealand and neighboring areas, as far away as South America. They range from small flowering shrubs to trees, and they gave their name to the Hebe Society, established in the 1980s to support native plants in New Zealand.

A handful of uses of Hebe as a given name include: 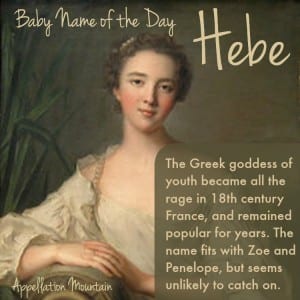 In the US, heebie-jeebies is slang for a sort of nervous anxiety. You might also say “this place puts me on edge.” It probably comes from a 1920s-era cartoon, but it caught on quickly and is heard throughout the English-speaking world.

It’s not quite a negative, and today the language is dated. But it’s widely known, and I suspect that it would make many parents pause before choosing this sound-alike name for a daughter.

Another reason to hesitate? Pronounced heeb, it’s a derogatory term for a person of the Jewish faith, from Hebrew.

Despite the drawbacks, the name has been heard in recent years. As of 2014, fourteen newborns were named Hebe – a new high.

Doubtless that’s because American parents have fallen hard for Greek names ending in e. The current US Top 100 includes Chloe and Khloe (#18 and #88), Zoey and Zoe (#22 and #32), and Penelope (#42), with Phoebe and Daphne also catching on.

What do you think of Hebe? Is it wearable? Non-American readers, I’d be especially curious to hear from you on this one!