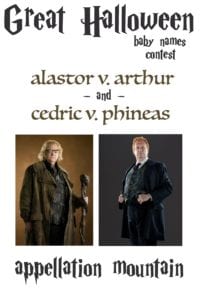 This contest focuses on the names, not the characters. It’s limited to the witches and wizards that we know and love from the original seven-books series. (Sorry, Theseus and Seraphina!)Though as the weeks go by, it looks like the good guys are likely to carry the day, in the Battle of Hogwarts and the Great Halloween Baby Names contest, too.

The good news? If you can’t tell a horcrux from a hippogriff, you can still play along. Just vote for the names that appeal to you most.

The contests only grow more difficult as the rounds continue, don’t they? I can barely bring myself to vote in this round!

But vote we must, in order to declare the favorite witch and wizard names on October 31st!

Wizards of Harry Potter Round of Four: Arthur v. Alastor

Two A names face off in this round, and this time, they’re both good guys. Arthur is, of course, the patriarch of the Weasley family. Alastor comes from Mad-Eye Moody, the fearless auror. Arthur feels like a buttoned-up traditional. But Alastor? While it looks like a spin on Alasdair, it’s actually a name from Greek myth that means avenger.

Wizards of Harry Potter Round of Four: Cedric v. Phineas

We all know Cedric, the doomed hero of the Triwizard Tournament. Phineas is a big name in the Black family tree. The first, known as Phineas Nigellus Black, was headmaster of Hogwarts back in the day. His son, Phineas Black, also wore the name, though he, like Sirius, would later be scratched from the family tree for his progressive views about Muggle rights and such. The names are both a little offbeat, but well-known beyond Hogsmeade.

This round will remain open until Thursday, October 25th. Check back on Saturday, October 27th for the final round. And the winners will be announced on Halloween 2018!