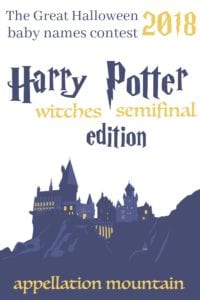 All of our names are drawn from the witches and wizards that we know and love from the original seven-books series. But it’s not about choosing our favorite character. That’s much too difficult! Besides, JK Rowling chose amazing names for heroes and villains alike.

Another bonus? You don’t need to know a thing about the series to cast your vote. We’re not looking for the best character – though it’s hard to overlook, of course – we’re just looking for the name that you love best.

The winner of each new match-up advances to the Quarter Finals next week. On October 31st, we’ll learn the most popular witch and wizard names, and they’ll share the title of Halloween Baby Name of 2018.

The legendary founder of Ravenclaw House takes on the indefatigable Hogwarts school nurse.

The future sisters-in-law both have great names! But only one can advance …

There you go! Just like the Triwizard Tournament, less a few dragons, portkeys, and maybe a golden egg or two.

Voting will stay open until Thursday, October 18th. The results will be posted with the Quarter Finals round, beginning on Saturday, October 20th.