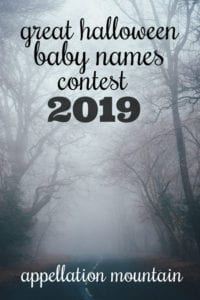 The votes are in for the opening round of the boys’ Great Halloween Baby Names Contest 2019!

As with the girls’ contest, there were some serious surprises … and a few expected outcomes, too. AM readers aren’t shy about favoring a more obscure name over a mainstream chart-topper, and that tends to come out in these competitions.

Now it’s time for the SemiFinals, and this time each contest has THREE names vying for a spot. I know, it’s just too hard! But these choices are never easy. Before we move on to the voting, let’s review the opening round results. As a reminder, all the entries in this year’s Great Halloween Baby Names Contest come from the television series Vampire Diaries and its spin-offs. But votes don’t necessarily reflect affection for a character – it’s all about the names here.

A few unexpected outcomes in the opening round are … well, to be expected. So let’s move on to the SemiFinals.

The French Lucien, Irish Finn, or Spanish Rafael? They’re all romantic, dramatic, even heroic kinds of names, but only one can get your vote.

All three names are up-and-comers amongst American parents right now. That makes this round especially tough!

Voting remains open through Thursday, October 17th. Check back next Saturday to see which names advance to the final round – and, of course, to pick your favorites! 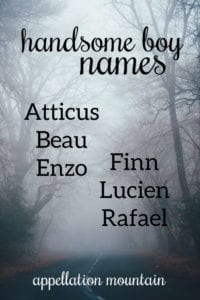