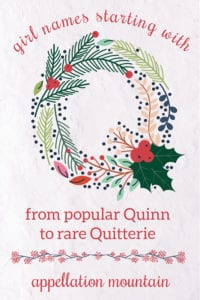 Girl names starting with Q make for a select and quirky list.

There aren’t many to choose from. It ranks twenty-fifth of the twenty-six letters of the alphabet. Only U offers fewer choices for our daughters.

Still, one of them makes the Top 100. And a second manages to make the Top 1000, too. The rest range from vaguely familiar to downright rare.

But these dozen Q names could be just perfect for a child.

In the 1960s, DuPont created a silky fabric called Qiana. It caught on as a baby name by the late 1970s. The spelling Quiana caught on, too, as did Kiana. The K spelling remains the most popular.

A regal title name in the key of Duke, Prince, and King, with some rock and roll edge, too.

Queen shares much with King, while Queenie might be closer to sparky retro nickname names like Sadie and Millie. It’s a particularly appealing nickname option for Victoria, inspired by the long-reigning British monarch.

A Spanish word meaning sweetheart, it’s rare as a given name, but not unknown.

A daring word name, and a unisex choice for a son or a daughter.

It could be a name borrowed from Incan mythology, or possibly a form of Aquila – meaning eagle.

An Irish surname name that could work well for a daughter, especially with nickname Quinn.

A Top 100 favorite, Irish surname Quinn is more popular for girls than boys. It’s a modern take on Lynn with the benefit of that stylish initial.

Possibly a name for a fifth daughter, akin to Quentin or Quintin for a son and so many other potential number-inspired names.

It’s both the name of a fifth-century saint and a name associated with Greek love goddess Aphrodite.

The French form of Quiteria.

Uncommon as a word, and nearly unknown as a given name, Quintessence implies perfection.

What are your favorite girl names starting with Q? 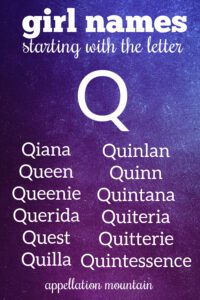 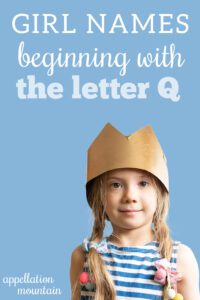