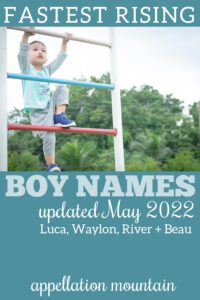 Time for the fastest rising boy names of the year.

Most of the time we talk about changes in rank on the popularity charts. But this list is based on the increase in number of actual births.

Why does that matter?

Sometimes it doesn’t, actually. Luca is the top name on this list of the fastest rising boy names … and there’s no question it’s gaining quickly in overall popularity, too.

So why look at the fastest rising boy names based on births instead of rank?

It might just be a better way to forecast trends and identify the next big names.

Because even the current #1 name in the US – Liam – actually gained in use in 2021, enough to make this list. Which suggests that parents haven’t cooled on Liam at all in recent years. The friendly, upbeat Irish nickname name might be poised to stay at the top of the list for another year or more.

But that’s for another post. For now, let’s look at the fastest rising boy names.

FASTEST RISING BOY NAMES as of MAY 2022

A vowel ending, a middle V, the first initial L – Levi’s sound is on point. Plus, Levi feels like a distinguished Old Testament name with history to spare and an Americana one, tied to the iconic blue jeans. It’s a versatile, enduring choice for a son.

Not too long ago, Maverick felt wild and daring. The name of a 1960s television series, the call sign of the main character in 1986 blockbuster Top Gun, and a term banded about in the 2008 presidential race, Maverick wasn’t quite a given name. Until it was, of course. With the long-delayed Top Gun sequel set for release in summer 2022, Maverick is having a moment. This is the fifth year in a row that Maverick has made this list.

A brief but high energy name, Beau has a great meaning – handsome. And it’s climbing quickly in use, along with a whole class of Beau names, like Boden, Bodhi, Bowie, and just Bo.

Once Atlas felt like a big name, a mythological choice with too much to shoulder. But it’s also a wanderlust name in the key of Journey, and an -s ender like Miles.

Yes, even the #1 name in the US can rise or fall – at least when it comes to actual births. So while Liam looks stable, ranked #1 for the fifth year in a row, this measure suggests that parents are still wild about Liam.

A great stands-out/fits-in name, Wesley has gained in use over the last few years.

An Italian name with a cool, edgy sound, Enzo was short for names like Lorenzo and Vincenzo in its native tongue. But Americans love just Enzo the best, a successor to Ezra and Luca.

Mentioned above, Maverick is the forerunner of a whole class of bold boy names. Rhyming with established choices like Chase and Jace, Ace is an obvious possibility with plenty of swagger.

Classics trend. That’s a little confusing to read, but we all know that Robert and Michael used to top the charts, and now rank far lower. Henry has clearly been among the trending and traditional in recent years.

We love Leo, a mini name with energy to spare. Longer Leo names are on the rise, too, but it’s just Leo that ranks highest.

A Biblical name with a scissor-y sound, Ezra brings to mind literary greats (think Ezra Pound and Ezra Jack Keats) as well as contemporary figures. While it’s nearly always ranked in the US Top 1000, it’s more popular now than ever before.

Brooks Brothers meets Garth Brooks, for a name that’s buttoned-up and a little bit wild. Brooks is at home in a board room or riding a Harley. The name’s ties to the natural world are yet another bonus. It’s charted in the fastest rising boy names for four out of the last five years.

It’s the name of so many fictional leading men, from Bauer to Skellington, Pearson to Frost. Then there’s Jack Kennedy and Jackie Robinson and Jack Nicholson, too. It’s a timeless name that’s effortlessly cool, and undeniably popular now.

Parents embraced the Hebrew Asher after Ashley became a chart-topping favorite for our daughters. The meaning – happy – is undeniably a bonus.

A nature name with that stylish -r ending, River was once an outlandish, one-person-only name. But the generation that loved River Phoenix in Stand By Me and Running On Empty grew up and made this a mainstream choice for our children.

August carries a serious meaning. But we rarely use august in that sense – or even that pronunciation. Instead, August is a summery choice, a name that brings to mind sea and sun – but in a subtle way.

An Old Testament prophet, Ezekiel’s name has been used for generations. But it’s only risen into the mainstream in recent years, thanks to a mix of history, stylish sound, and built-in nickname Zeke.

Originally given to a son of Hugh – or possibly Richard – Hudson has rocketed up the popularity charts in recent years, one of several ends-in-son names to catch on.

Short and bright, Kai’s Hawaiian meaning is appealing: ocean. But the name can also have roots in other languages and cultures, from King Arthur and Camelot to a Hans Christian Andersen fairytale.

The K spelling Luka is outpacing Luca-with-a-C these days, those Luca remains the dominant spelling. It’s appeared in the fastest rising boy names for four of the last five years.

The white hot classic of the moment, Theodore replaced another long classic – Alexander – in the boys’ Top Ten this year. But with names like Sebastian and Benjamin so popular, Theodore might still have farther to climb. It has appeared in the fastest rising boy names for the last five years running, and could still climb higher.

Another R-ending surname name, Walker probably owes its rise to the reboot of 90s favorite Walker, Texas Ranger, now titled simply Walker. The show debuted in January of 2021, plenty of time to influence parents. It’s recently been renewed for a third season, plus a prequel titled Walker: Independence is now in the works.

Country music legend Waylon Jennings was originally named Wayland. But Waylon feels more at home in 2022, a successor to Jaylen with a Western sensibility. For four of the last five years, Waylon has been among the fastest rising boy names.

Pop culture in 2021 was dominated by the small screen – even when we were talking about movies. Pixar’s 24th feature film took us to the fictional town of Porto Rosso, complete with a mermaid-like boy eager to see the wider world. His name was already on the rise, a Luke update that’s just a little different. For the past five years, Luca has appeared in the fastest rising boy names’ list every single time.

We pay lots of attention to names that rise quickly in a single year. But sometimes those rapid rises don’t last – and the names fall every bit as quickly. The names that climb year after year, though? Those are the future stars to watch.

Sharp-eyed readers will notice that Theodore fits the criteria for this list … but it’s already ranked in the current US Top Ten, rising to #10 in 2021. That doesn’t mean the name won’t rise any higher – it certainly could! But it’s already proven that fast-climbing names in terms of actual births are always worth watching.

What do you think of the fastest rising boy names? Are any of these names on your list? 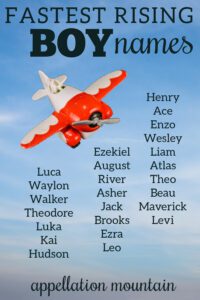