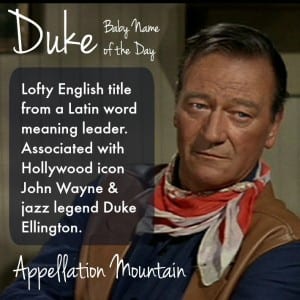 It’s a noble name with ties to John Wayne, jazz, and a reality show couple.

Debuts & Comebacks Week starts with Duke as our Baby Name of the Day.

As a given name, Duke is right on trend:

Men answering to Duke as a nickname are even more common.

Edward Kennedy Ellington is one of those men nicknamed Duke.

His career spanned more than five decades, beginning in New York City during the height of the jazz age. His orchestra headlined the legendary Cotton Club during the wild years of Prohibition. A musician, band leader. and noted jazz composer, Ellington toured the world, composed for musicals and films, and elevated jazz to an art form. He was awarded a posthumous Pulitzer Prize in 1999.

Another, fluffier association? The 1962 pop song “Duke of Earl,” a #1 hit for Gene Chandler, and an entry on The Rock and Roll Hall of Fame’s 500 Songs that Shaped Rock and Roll.

It’s impossible to talk about this name without talking about John Wayne.

Born Marion Morrison, he took his nickname from the family dog. He was credited as Duke Morrison in his early days as a bit player. But by the time he landed his first big role in 1930, the studio had renamed him John Wayne.

John Ford’s Stagecoach made him a star in 1939. Between the 1930s and 70s, he’d make more than eighty Westerns, reliably playing the resilient hero – usually a cowboy, sheriff, rancher, or other upholder of all that is good and just.

The legendary actor is doubtless part of the reason the name fared so well in the 1960s, and may still inspire parents today.

Duke also brings to mind the North Carolina university, known as an academic – and basketball – powerhouse. The school takes its name from the Duke family. Industrialist James Buchanan Duke made a major bequest to the former Trinity College back in 1924. With Princeton in the US Top 1000, could some of those baby Dukes be named by proud alumni?

Maybe, but here’s a more likely explanation: in 2012, Bill and Giuliana Rancic welcomed a son named Edward Duke, but known by his middle. The Rancics – both television personalities – starred on an E! reality series for seven seasons, detailing their arduous trip to parenthood, including miscarriages and Giuliana’s struggle with cancer.

Overall, Duke is an on-trend name that feels wearable in 2013. It’s got a lot of masculine swagger, but also a relatively long history of use. If Luke feels too safe and Earl too retro, Duke might be the name for you.

What do you think of Duke? Is this name likely to continue to rise?