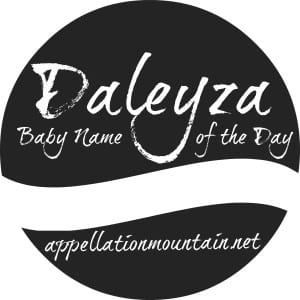 The small screen strikes again, with the name of a famous musician/reality television star’s daughter in the spotlight today.

Thanks to Christina for suggesting Daleyza as our Baby Name of the Day.

Here’s the thing about invented names: plenty of parents make them up, but they tend to work with the same raw material as every other parent in the same generation.

So in 1913, you might have met a baby Vella or Annamae.  Their modern equivalents are Brylee and Kaylyn.

Most of them never really catch on. I think they’re devilishly tricky to remember – was that Jaylynn or Jayleen?  Or Jaylin?  One ‘n’ or two?

But a handful of names do stick, usually thanks to a high profile bearer of the name.

America’s Next Top Model put Jaslene in the US Top 1000 for a few years after Jaslene Gonzalez’s Season Eight win.

File Daleyza with Jaslene – though she could be even more popular.

In 2012, the Hernandez family made the leap to reality television, starring in Larrymania on mun2, part of the NBC/Telemundo Spanish-language networks in the US.  It’s currently in its third season.

Larry is a father to four: sons Larry Jr. and Sebastian from a previous relationship.  His first daughter with girlfriend Kenia Ontiveros is the one with the trendsetting name.

Daleyza Hernandez has over 180,000 followers on Instagram alone, so no surprise that she’s got some namesakes.

The question is whether Daleyza has roots, and the answer isn’t straightforward.  Hernandez and Ontiveros appear to have invented Daleyza.

And yet, there’s also Daya, Dayana, and Dayanara – Spanish-language names.  Dayanara is a character on Orange is the New Black, nicknamed Daya.  Could it be that D is a favored letter for creative naming amongst Spanish-speaking Americans?  (It’s tough to tease out data on this question, so comments encouraged!)

As for the rest of Daleyza’s name, it brings to mind plenty of mainstream English-language names: Eliza, Theresa, and all of those girls named Layla – choose your spelling.

And yet, she’s undeniably novel.

Most reports suggest that the most popular names for Spanish-speaking American parents are more mainstream choices with crossover potential.  Latina.com lists Sofia, Isabella, Victoria, and Emma in the girls’ Top Ten, based on data from Baby Center.

Few names with such obvious pop culture roots go mainstream, but it is far too soon to say if Daleyza will fade into the decade, or if she’ll stand on her own, long after the Hernandez family has left the spotlight.

Of course, that’s not likely to happen anytime soon, and Larry and Kenia welcomed a second daughter just a few days before Christmas 2013.

We’ll have to wait for the 2014 numbers to see if parents are still in love with Daleyza – and, of course, to see if Dalary makes her debut!

What do you think of Daleyza?  Does it feel like a name that will be popular with families who don’t follow Larry, or is this one strictly for fans?