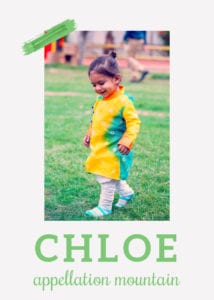 The baby name Chloe comes from Greek, tiptoes through the New Testament, and eventually arrives in Paris, before becoming an early twenty-first century favorite in the US.

In Greek myth, Demeter was goddess of all things growing. The harvest, yes, but also agriculture in the broadest sense.

Chloe means “green shoot.” Think the buds on trees in the spring. So no surprise that one of Demeter’s epithets – a poetic title of sorts – was Demeter Chloe.

Unlike many names associated with the gods, the baby name Chloe must have made the leap to given name status fairly early. In the New Testament, Paul briefly mentions a woman by the name.

All we know is that she was a Christian woman living in Corinth, though some speculate that use of her name is significant. After all, she’s a woman with a household – Paul refers to “Chloe’s people.”

Like so many Biblical names, it rose in use during the Protestant Reformation. Martin Luther nailed his 95 Theses to the church door in 1517. And yet, it wasn’t just religious reformers embracing the name.

Way back in the second century, ancient writer Longus penned a romance called “Daphnis and Chloe.”  We don’t know much about Longus, but the story survives. In brief, the two grow up together, fall in love, endure all sorts of calamities and near-misses, but end up marrying and living happily ever after.

The story was translated into English in 1587.

Alexander Pope used it for a character in The Rape of the Lock in 1712.

The name was used in small numbers across the decades.

By 1880, when US name popularity data is first recorded, the baby name Chloe appeared in the US Top 1000. It would remain there into the 1940s.

The Vian novel usually gets credit for Chloe’s comeback in French. In turn, Vian probably took inspiration from the song.  L’Ecum des jours was overlooked during the author’s lifetime, but by the 1960s, it was in vogue, and a film adaptation followed in 1968.

Chloe took a slower road in the US, breaking into the Top Ten in 2008, propelled by characters on soap operas and television shoes, plus actress Chloe Sevingy – her dad is French Canadian – and maybe Khloe Kardashian, too.

While the name has fallen slightly since then, it remains an intriguing mix of ancient and modern.