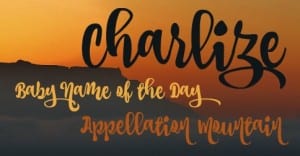 Charles is a classic, and Charlotte is rising fast. How about this exotic member of the extended family?

Thanks to Lindsay for suggesting Charlize as our Baby Name of the Day.

Charlize: All About Ms. Theron

I was sure that I would find a Charlize or two somewhere between the 1950 and 70s, the age of Cheryl, Charmaine, and Sherry/Sheri/Cheri. For the most part, the names were all modern innovations, an example of how a stylish sound can catch on in unexpected ways.

But this name wasn’t heard in the US until South African actress Charlize Theron became a star. 1998 was the very first year fiveor more girls were given the name in the US. It was a year after Theron had a role in The Devil’s Advocate and the same year she co-starred with Bill Paxton – and a giant gorilla, though mostly it was an actor in a gorilla suit – in Mighty Joe Young.

Theron’s star continued to rise, and she won an Oscar for Best Actress in 2004’s Monster. That’s the same year Charlize first charted in the US Top 1000 as a baby name. It debuted at #624.

So was this name invented just for the actress? Not exactly.

Names ending in -ize are common for girls in Afrikaans. I also found Elize (Elise), Delize, and Marlize (from the Dutch Marlies, from Maria and Elisabeth).

Afrikaans evolved from Dutch, the language brought by European settlers to South Africa in the eighteenth century. It’s picked up words from Portuguese and German, as well as languages spoken by native peoples in southern Africa. It’s also evolved it’s own spelling and pronunciation conventions.

Changing -ise and -ies endings to -ize is just one characteristic specific to Afrikaans.

Ms. Theron’s father is Charles, so the name honors her dad. And it’s not a wacky heritage choice, either – Theron’s first language is Afrikaans, even though she speaks fluent English.

Charlize: Other Than the Actress 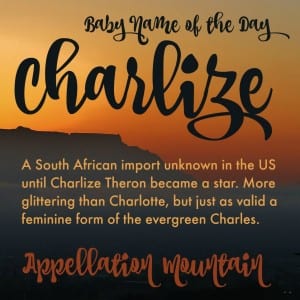 Pop culture has always influenced what we name our children. Hollywood stars, yes, but also musicians and fictional characters, too. Cher was boosted first by the singer, then by the Clueless character. Madonna wasn’t entirely new when the singer scored her first hits in the early 1980s, but the name rose as she went from pop star to household name.

Enough girls have been given the name that it isn’t unknown. And yet, I think the question is whether Charlize sounds like it wouldn’t exist without the actress?

Charlene emerged as a new feminine form of Charles in the early twentieth century. It was scarcely heard before then, and peaked in the 1940s. It’s heard in France, too, but I can’t tell where it first developed. It peaked in France in the 1990s.

So it’s possible that we would have invented Charlize if it hadn’t been imported. And yet, we don’t really use the -ize ending in the US, either. Elise and Annalise give us a similar sound. But there’s something glittery and glam about this name, and the unusual -ize ending is probably why.

Overall, it’s a rarity that is strongly associated with the actress – but given her success, that’s not a bad thing.

What do you think of Charlize? Does it seem too tied to the actress?