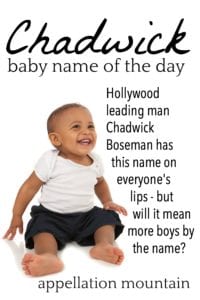 Chadwick brings to mind Hollywood leading man Boseman. But it had a good run in the 1970s – and might just make a comeback today.

Our Baby Name of the Day is inspired by the star of Black Panther.

Chad sounds like a 60s surfer, or a child of the 70s. But it has deep roots, an Old English name belonging to a seventh-century saint.

Yup, Saint Chad. Doesn’t sound quite right, does it?

Add the -wick, and this name refers to a place, most likely a dairy farm owned by Chad. At least three places in England answered to the name, and I found a few places – though no official villages – still answering to Chadwick this or that.

A handful of same-named places exist in the US, and elsewhere in the English-speaking world.

Like many a place name, it became a surname for families from the area.

Dozens of notables appear in the historical record. Here are just a few:

I could go on – and on! Suffice to say the name appears regularly as a surname.

Many surnames only recently graduated to first-name status, at least in big numbers.

But this one is different.

Before we go any further, let’s detour to Africa. The nation of Chad takes its name from a nearby lake. Lake Chad comes from an indigenous term for a large body of water. There’s no connection between that word and the Old English given name.

Back to the 1940s. Do you know the World War II symbol Kilroy? As in, “Kilroy was here,” scrawled by American servicemen during the war? The drawing that accompanied it, a bald man with a big nose, originated in the UK – where he was originally known as Mr. Chad.

Theories about the symbol and the names abound, but there’s no question: the name gained in use as all those veterans returned home and started families.

It wasn’t brand new in the era, though. Instead, Chad appeared as a character in a book called The Little Shepherd of Kingdom Come way back in 1903. The novel became a movie in 1920, again in 1928, and once more in 1961. A coming of age tale set during the American Civil War, it must have been familiar to many.

And it was ready and waiting, a fresh name that would fit right in with fast-rising Bradley and Brad, as well as a generation of preppy/surfer boy names. Think Scott, Todd, and Dean.

Just as a great many Brads were actually Bradley, a handful of Chads were really Chadwick. That includes the drummer for the Red Hot Chili Peppers, Chad Smith.

Chadwick: By the Numbers

The names declined together, too, and Chadwick left the rankings entirely after 1996. A mere 18 boys received the name in 2016.

He’s already had some extraordinary roles, playing Jackie Robinson in 42 and James Brown in Get On Up.

But Black Panther feels different. He’s part of the blockbuster Marvel Universe, the first black superhero to take his place along with so many household names. It’s also considered a truly excellent example of the genre, setting records for ticket pre-sales and packing theaters. Suddenly, Wakanda tops everybody’s wish list of fictional places to visit.

Boseman’s character is named T’Challa, and when the movie opens, he’s just ascended the throne as king, following the death of his father. I’ll keep this spoiler free, but let’s just say that T’Challa is straight-up heroic, and the entire cast is superb. We’re already speculating which Black Panther character names might catch on.

It seems reasonable that the leading man’s name might also get a boost.

Chadwick: But Not Chad

Parents who use the name today would almost certainly use it in full. If Chad is dad-aged, then Chadwick fits right in with all those surname names, like Wilder and Brooks. Call it a preppy hellraiser name, one that’s buttoned-down and downright cool.

What do you think of Chadwick? Would you consider it for a son?