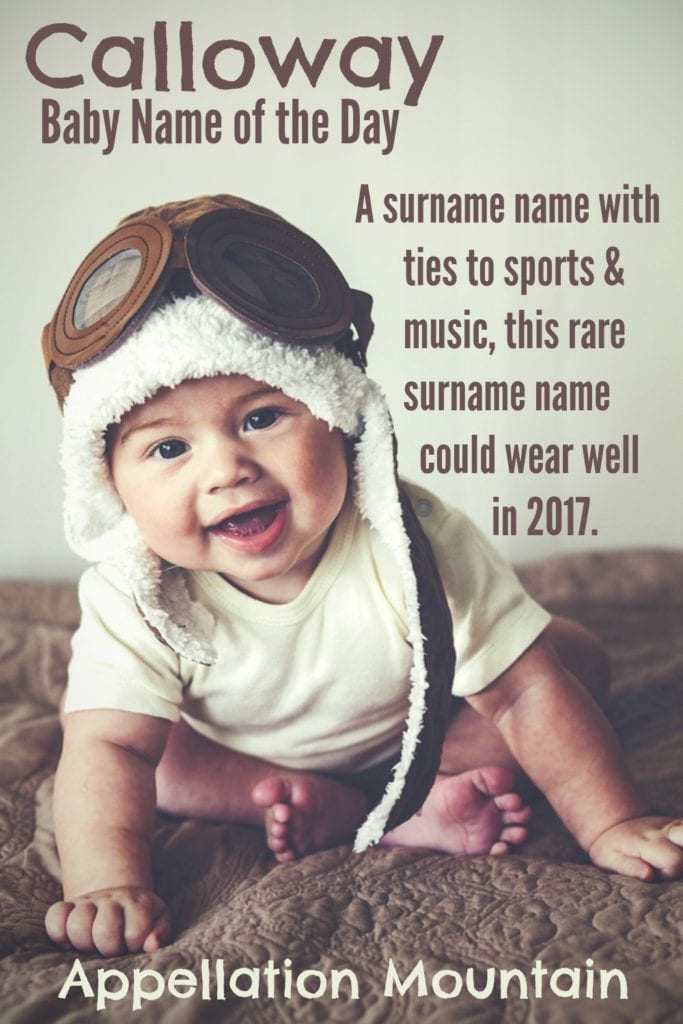 Calloway makes a surprising choice for a son’s name, but could fit right in with longer surname picks like Sullivan.

Also spelled Callaway, this name starts out on the map. It comes from Caillouet in northern France. The town seems like a dot on the map today, administratively combined with neighboring Ogreville. But it seems like it once played a bigger role in regional affairs.

Caillouet comes from the French word caillou, for stone. It translates roughly to little stone, or pebble. (Yes, that means the television character, Caillou, takes his name from the word, too.)

The Normans probably brought the name to England, where it was whispered down the alley into its current form.

Callaway Golf Company is considered the world’s largest manufacturer of golf clubs. It makes plenty of related equipment, too.

The company was founded by Ely Reeves Callaway, Jr., back in 1984. He’d already retired from a successful career in textiles, and established and sold the successful Callaway Vineyard and Winery. Because Ely golfed a lot in between gigs, he took an interest in the equipment.

The company became known for innovation. They introduced the Big Bertha, as well as new golf balls and other advances.

Or maybe you’ll think of Cabell Calloway III, known as Cab. Born in 1907 to educated, professional parents, Cab followed older sister Blanche into music. Despite their parents’ objections, both siblings fell in love with jazz. While attending college in Chicago, Cab spent most of his time performing at the city’s many clubs.

During the 1930s and 40s, he became a successful jazz singer and bandleader, best known for his association with Harlem’s Cotton Club.

Actually, plenty of settlers must have answered to this surname. It appears on the map, in both the ‘a’ and ‘o’ spellings, throughout the US.

Calloway: By the Numbers

Despite our general familiarity with the surname, it remains rare as a given name.

Girls also receive the ‘a’ spelling at least some of the time. There were 14 girls named Callaway in 2015.

Despite minimal use, there’s reason to believe this name could catch on.

Add it up, and this rarity could wear well. It’s sporting, musical, and right on trend. Plus, it’s just plain fun to say!

What do you think of Calloway?