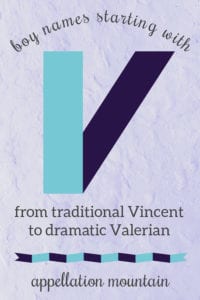 It’s an international letter, too. There’s Sanskrit Vivaan and Vihann, Slavic Vassily, Italian Vincenzo and Valentino, and more. Plenty of those rank in the current US Top 1000.

But while v features in chart-toppers from Oliver and Levi to Xavier and Everett, it’s relatively uncommon as a first initial. The letter V ranks just 22 out of the 26 letters of the alphabet in terms of popularity.

A place name and a surname or two round out the list.

A storied name, worn by Vincent van Goh and Vince Vaughn, Vincent comes from a Roman name meaning “to conquer.”

Like Grace or Faith, we’ve known Victor as a given name for so long that it’s possible to overlook its status as word name.

And the Italian version of this classic names.

The Spanish form of Vincent.

A Slavic take on Valentine – and Valentino, also heard in French.

A mini name with a half dozen possible origins, including a nickname for Ivan – John.

Surname Vance once referred to someone who lived near a marsh.

An ancient favorite, Valerian is familiar to modern parents thanks to a French science fiction comic strip turned big screen movie, Valerian and the City of a Thousand Planets. With Julian in the Top 100, why not Valerian?

A straight-up word name, Valor sounds like so many r-ending favorites for boys. Actor Emile Hirsch named his son Valor in 2013.

Plenty of Dutch surnames include “van der” – from the. So Vander is a little bit of a smoosh, but it’s also a creative Van-Xander mashup that seems perfectly logical.

A Slavic form of buttoned-up Basil, Vassily might be a tiny bit tough to pronounce in English. Emphasis is on the second syllable: va SIL ee.

Originally a Welsh surname, Vaughn means little – as in the younger family member with the same name. It’s a bit like junior, but with a polished, handsome appeal.

Vere started out as a surname, brought to England by the Normans. It may mean alder, though other origins and meanings are possible.

We know it as a place name borrowed from Vermont, the first state to enter the union following the original thirteen United States. The Green Mountain state’s name literally means green mountain in a sort of Franglish. Mont Vert would be the literal translation. It doesn’t sound as name-like as Arizona, but still holds potential.

A Scandi import, Viggo was made famous by Oscar-nominated actor Viggo Mortensen.

William gave us Wilson and John, Jackson and Johnson. Vinson, then, comes from Vincent.

The name of a bird, seldom used for children, but rich with potential as a given name.

An ancient poet, author of the Aeneid, Virgil’s towering legacy means that the name has never really fallen out of use. That said, it ranked in the US Top 200 into the 1940s … but hasn’t cracked the Top 1000 for thirty years.

The name Vitus never quite made it to English, but the early saint’s name endures in many European languages. It comes from the Latin word for life.

A Sanskrit name with a worthy meaning: wisdom.

A slimmed-down spelling of Vaughn, or a traditional part of aristocratic German surnames.

What are your favorite boy names beginning with V? 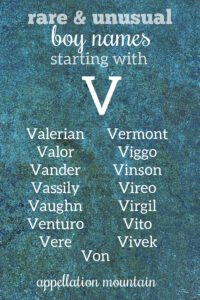 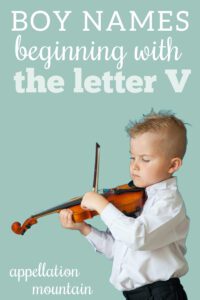