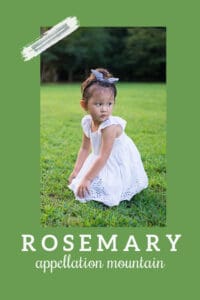 The baby name Rosemary combines classic sounds with a meaning from the nature.

Thanks to Elizabeth for suggesting our Baby Name of the Day.

Sometimes they’re smooshed together into one new name: Annabeth. But sometimes we use them as double names: Jeanne Marie.

Rosemary has been in use since at least the 1800s, though double names like Maria Rosa, might be older still.

If it is a double name, then the name’s meaning combines Rose – the flower – with Mary. While the latter’s meaning is debated, bitter or bitter sea, rebellious, and beloved are all possibilities. So you might find the concepts combined, with meanings given like “bitter rose.” But that’s an oversimplification.

Because there’s another possible origin – and meaning – for the name.

DEW of the SEA

The herb Rosemary grows in the Mediterranean and Asia. The name comes from the Latin ros marinus – dew of the sea.

Ancient Egyptians, Greeks, and Romans all used the herb. Pliny mentions it in his writings in the first century BC. A few hundred years later, rosemary had arrived in China. The Romans probably brought it to England, and by the age of Charlemagne, it flourished in monastery gardens.

Rosemary faded in the following decades, but never left the US Top 1000.

In the 1950s, Rosemary Clooney scored a long string of enduring hits. Chances are you’ve heard a few bars of “Mambo Italiano” or “Come On-a My House,” songs that remain staples on 1950s-era soundtracks all these years later.

She also co-starred with Bing Crosby in classic movie White Christmas in 1954.

Despite all of her many accomplishments, she’s perhaps best known as the aunt of yet another entertainer: Hollywood A-lister George Clooney.

As Rosemary’s career faded, so did the name. But it wasn’t related; instead, the name’s long run in the Top 100 was naturally drawing to a close.

The story Guy and Rosemary Woodhouse, a young married couple who move into an apartment in a mysterious, Gothic New York City building. They befriend an older couple, and everything falls into place. Guy’s acting career takes off. And Rosemary? She’s expecting their first child.

But it’s a horror movie, and so it turns out that Rosemary’s baby? Spoiler alert! It’s the son of the devil himself.

The novel and movie helped usher in an entire generation of horror novels and movies.

But the name? It fell into the 300s and 400s in the succeeding decades, continuing its slide, now with the added baggage of the ill-fated character to overcome.

Instead of falling entirely out of use, the name’s popularity has started to climb once more.

What explains the name’s resurgence?

Old-lady names never stay that way forever. Just as we’ve embraced Hazel and Ruby, Evelyn and Josephine, the baby name Rosemary was due for a comeback right about now.

Nicknames Rosie, Romy, and maybe even Rory make it nicely flexible, a quality that appeals to many parents.

With so many flower names topping the charts, other nature-related choices seem bound to catch on. Rosemary makes an alternative to Willow and Violet.

In fact, Rosemary is the kind of name that splits the difference. The combination of the names Rose and Mary feels undeniably classic, but the name’s status as a herb – and the Latin meaning of Rosemary – make it a nature name akin to River or Skye.

If you’re after a traditional name with an intriguing mix of retro style and modern meaning, Rosemary might belong on your shortlist.

What do you think of the baby name Rosemary? 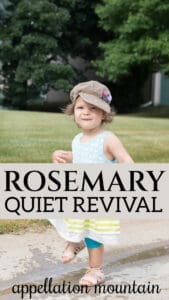 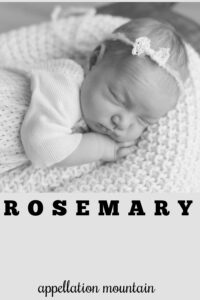