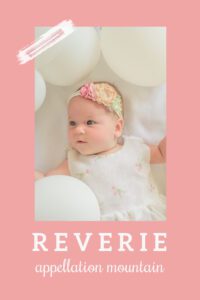 Thanks to Jenny for suggesting our Baby Name of the Day.

If you’re a 90s kid, “rave” conjures up a certain kind of party. It turns out that reverie and rave share roots. They both come from an Old French word suggesting revelry – but also delirium.

By the seventeenth century, the word reverie specifically referred to a daydream. Which isn’t necessarily all that much removed from the original sense.

Today, the French word for dream is le rêve.

By the nineteenth century, a reverie could refer to any dream-like piece of music.

At least a dozen were actually titled “Reverie” over the years. There’s a piano piece by Debussy from 1895, another by Chopin circa 1840.

It’s not just in the past, either. Billy Joel joined their number in 2001.

Pierre-Auguste Renoir and Alphonse Mucha were just two of many artists to title their works Reverie.

It is the kind of word that rarely occurs in everyday speech, and yet is broadly familiar – an ideal candidate for a noun name, perhaps.

But how did we go from music and works of art to the baby name Reverie?

In some ways, it hasn’t quite happened yet.

2010 marks the first year it was given to five girls, enough for Reverie to debut in the US Social Security data.

No question, then, that the baby name Reverie has slowly filtered into use in small numbers.

But the question remains: how did parents come to consider it in the first place?

Avery comes in at three syllable. It’s tailored, unisex in theory – though used predominantly for girls in fact. That great Y ending connects Avery to former favorites, like Dorothy, Kimberly, and Emily. The majority of popular names for girls in English end with A, but Y and IE aren’t far behind.

But there’s also a middle V in the baby name Reverie – just like chart-toppers Olivia, Evelyn, and Ava. Oh, and Avery, of course.

So it’s easy to imagine parents hearing the word reverie and thinking of it as a potential name for a daughter.

It’s also true that many parents have sought out uncommon word names. Writer Rebecca Woolf named her twins Boheme and Reverie in 2011. She cites both Debussy and a Longfellow poem as sources of inspiration.

But looking at the numbers, the baby name Reverie has climbed along with Dream. The words are closely connected.

But the baby name Dream entered the US Top 1000 in 2017. That’s the year after Rob Kardashian and Blac Chyna welcomed daughter Dream Kardashian. The famous family has a way of making unconventional names more familiar. So as Dream has entered the Top 500 in the US, it likely opened the door for the baby name Reverie, too.

While the baby name Reverie is soft and sleepy, a trance-like, fairytale name, it’s also surprisingly full of energy.

You might shorten Reverie to Evie or Ever. But the most logical nickname? Rev.

As in revolution. Or to rev your engine, causing it to run faster.

Nickname Rev amps up the peaceful baby name Reverie, lending it an edge.

Parents looking for rare-but-wearable names should definitely put the baby name Reverie on their list. It’s uncommon, but immediately familiar. The meanings are intriguing, with nods to creative pursuits. And while it’s a thoroughly twenty-first century pick, ties to classical music and art make it feel more enduring than many a modern word name.

What do you think of the baby name Reverie? 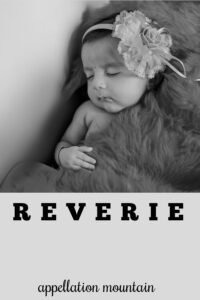