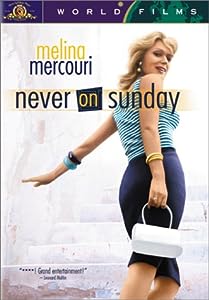 Cover of Never on Sunday

This Greek name owes her success to two actresses.

Thanks to Liz for suggesting Melina as our Baby Name of the Day.

Melissa, Pamela, Melanie, and Melody made the mel element popular in the twentieth century.  Melina has several possible origins:

With the exception of Melanie, few of the mel names have truly ancient roots.  But census records confirm that there were a handful of Melinas in the US near the end of the nineteenth century and in the first half of the twentieth.

The Melina who put her given name on the map was born Maria Amalia, but rose to fame as actress Melina Mercouri.  She scored a Best Actress Academy Award nomination in 1960 for her role in Never on Sunday.  At Cannes, she won the Best Actress award.  The plot owes something to My Fair Lady, except Melina’s character is a hooker.

Still, she never quite caught on, and by 1986 was headed towards obscurity.

Then along came another actress, this time an American of Greek descent, Melina Kanakaredes.  In the early 1990s, she played Eleni on Guiding Light.  Kanakaredes has had a long run on the small screen, starring in medical drama Providence and then CSI: NY.

It makes for the kind of steady exposure that keeps a name in parents’ minds.  And yet it isn’t so strongly associated with a single figure – think Cher or Kimora – that it seems extreme to bestow it on a child.

There is one other Melina to consider: WWE’s five-time champ, Melina Perez.  Her first title was won in 2007, and her most recent in 2010.

While Melina remains a relatively rare #456, she made a big jump from 2008 to 2009, and she’s often heard on baby name discussion boards.  And why not?  She’s just a little bit different, neither truly unusual nor over-exposed.  Melina makes for a relatively modern name, but she doesn’t feel invented.  Besides Mel and Lina, you could also use Milly as a nickname.

If Melina has a failing, it is that her story is ever so slightly incomplete.  There’s no single figure – no goddess, no queen, no literary legend – strongly associated with the name.  Of course, that’s a plus for parents hoping for something fresh, but still solidly feminine.