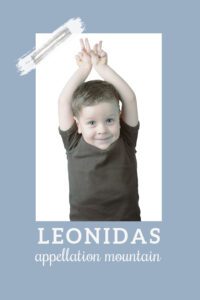 The baby name Leonidas remains rare, even as Leo roars back into wider use.

First, it’s worth noting that not every Leo name relates to lions.

But the baby name Leonidas does come from Greek roots, and it refers to a lion.

The -idas ending is a suffix meaning “son of.” So Leonidas, once upon a time, referred to the son of Leon.

There’s a piece of ancient history that’s because wildly famous, and Leonidas is at the heart.

Along with a half-brother, Leonidas I ruled Sparta during the fifth century BC.

They were at war – always. But in this case, the Persians were invading Greece.

The Spartans’ army numbered just 300 soldiers, though the total force was closer to 7,000, including troops from other allied states. Some accounts suggest that the Persians were on the march with perhaps over 100,000 men. (Though contemporary accounts suggested it could be one million.)

Thermopylae, a narrow mountain pass, was chosen as the outnumbered Greeks’ best chance to stop the Persian advance.

And it worked for days – including three days of fighting.

But then they Greeks were betrayed. A local showed them a small side path used by shepherds, and Persian troops began to quietly move behind Sparta’s line.

As it became obvious that they would be defeated, Leonidas dismissed most of the troops. But he, along with his 300 Spartans and 700 others, opted to stay and fight. Defending the pass bought time for the rest of the Greek troops to retreat.

And while Leonidas lost the battle – along with his life, and the lives of all of his men – the Greeks would ultimately win the war the following year.

Some argue that Thermopylae changed the course of the war, but most scholars disagree. Instead, the sacrifice of Leonidas probably served as symbolic – a rallying cry, and a signal that Sparta was willing to undertake heroic effort to defend their country and their allies.

No surprise that the baby name Leonidas endured. He was widely celebrated as a courageous leader and hero.

Perhaps as many as half a dozen saints Leonidas are recorded in the early church.

Arguably the most important was Leonidas of Alexandria. He was martyred under Roman persecution around the year 202. His son, Origen, became a theologian, a prolific writer, and one of the most influential thinkers of the early church.

Either because of the Spartan commander’s fame or despite it, the baby name Leonidas remained in use throughout the ancient world.

Fast forward to the late nineteenth century in the US.

The baby name Leonidas hovered on the fringes of the US Top 1000, barely making it in a few years, but mostly overlooked. That’s despite the Top 100 status of names Leo, Leon, and Leonard during the same era.

It would take more than a century for the baby name Leonidas to enter the mainstream.

But we have to return to that ancient battle to understand the baby name Leonidas’ twenty-first century appeal.

It’s not just references to Thermopylae. Though there are plenty of those, from poems and history books, across the years.

The first movie about the battle was made in 1962.

And that’s what did it.

A 2014 sequel, 300: Rise of an Empire, followed. While Leonidas wasn’t part of the story – obviously – he was seen in flashbacks. Factor in our ongoing affection for Top 100 name Leo, and it’s easy to see why this name has continued to gain.

Pretty impressive for a name launched by a king who died in battle over 2500 years ago.

The name sounds ancient, fierce, and self-sacrificing. It’s a name that signals courage, all these many years later.

What do you think of the baby name Leonidas? 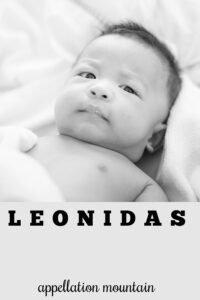