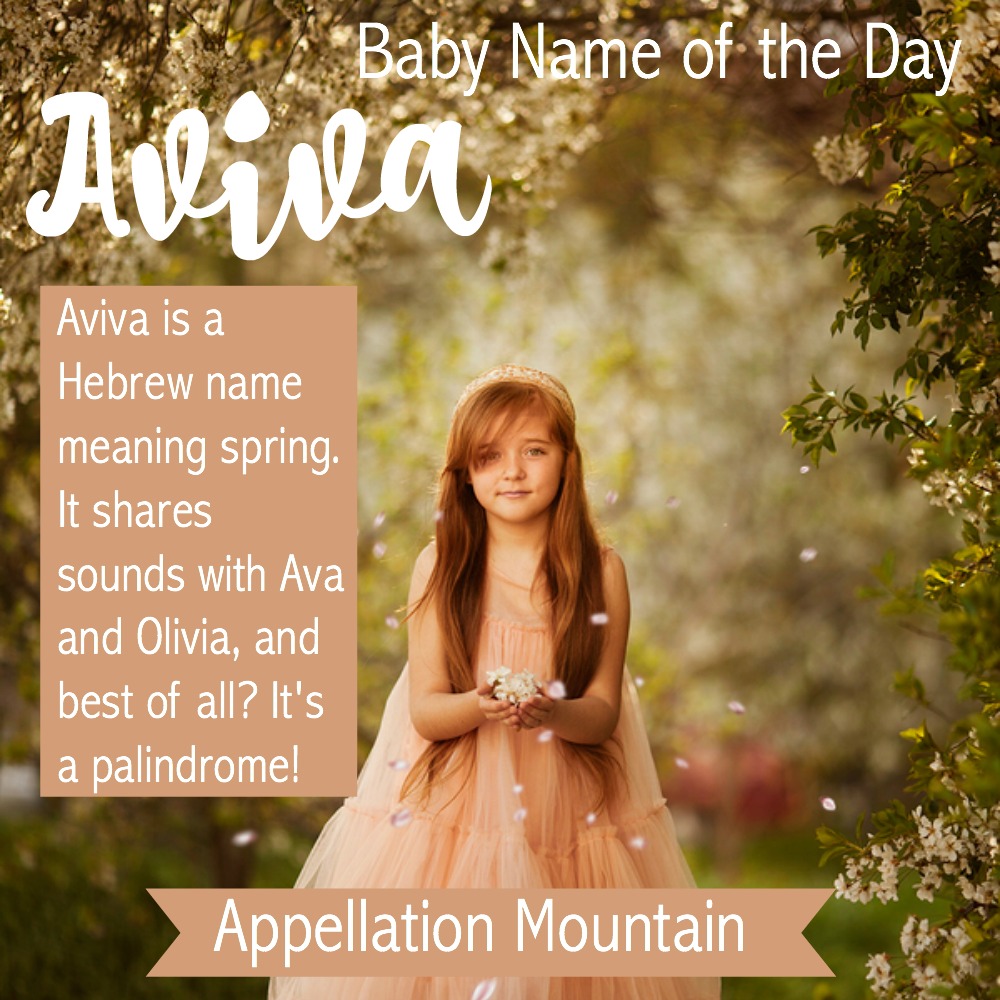 Aviva shares sounds with favorites like Ava, Evelyn, and Amelia. But it’s much less common.

Thanks to Christy and Photoquilty for suggesting our Baby Name of the Day.

In Hebrew, this name means spring.

That makes it a great name for parents expecting a baby in May. But while Mae and June are stylish, Aviva has never cracked the US Top 1000.

It’s also almost a place name. Tel Aviv was established in 1909 – a modern city in an ancient land.

Many ideas were considered for the new city’s name, but it was ultimately inspired by a work called Altneuland by Theodor Herzl, an early Zionist. When it was translated from German to Hebrew, the translator, Nahum Sokolow, titled the work Tel Aviv.

The name came from Tel Abib, a Mesopotamian settlement mentioned in Ezekiel. It caught on because the idea of spring suggested renewal, a powerful concept for the fledgling settlement.

So while this seems like a simple nature name, there are layers of meaning.

A handful of pop culture uses have given this name a tiny boost. An early season of Charmed included a character by the name. So did 2007’s monster-croc movie Primeval. There’s an animated Aviva on The Wild Kratts and a real one on The Real Housewives of New York.

2007’s Superbad made a starlet out of Aviva Farber. She’s acted steadily in television guest spots ever since.

But none of those uses were enough to make the name catch on, despite a very on-trend sound.

One more reason this name fascinates? Like Hannah, Otto, and a handful of other words, it is spelled the same forwards and backwards – it’s a palindrome.

While that’s a fun fact, it’s probably not reason enough for parents to consider a name.

Aviva: Rarity on the Rise

Why is this name so rare in the US? Plenty of names big in Israel have never caught on in the US. Think of tailored Tamar and -et girl Ayelet. But that doesn’t mean they can’t. Rachel and Rebecca were the darlings of another generation, and now Naomi and Hannah are playground staples.

And yet, it’s sort of astonishing that Aviva remains under the radar. It shares sounds with Top Ten favorites Ava and Olivia, rising picks Evelyn and Avery, as well as all of the Vivi names.

Maybe that’s because few parents are really hearing the name – and you can’t consider a name if you don’t know that it exists. One good fictional character by the name, and this could be the next big thing.

Or maybe it’s slowly happening now. Because while the name remains rare, usage has increased steadily. From the 1970s through the early 2000s, around three or four dozen girls received the name every year. It’s slowly inched up over the last few years, though, and in 2014 there were 94 newborn Avivas.

Overall, the name remains a great options for parents interested in a rare name with an appealing meaning and an on-trend sound.

What do you think of Aviva?

This post was originally published on April 1, 2010. It was substantially revised and re-posted on May 9, 2016.