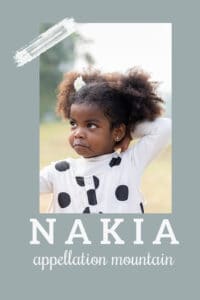 Thanks to Cee for suggesting our Baby Name of the Day.

Way back in 1974, Nakia debuted on NBC. Starring Robert Forster, it told the story of a deputy sheriff in a fictional New Mexico town. He’s a full-blooded Navajo, often torn between Native American culture and the expectations of modern policing.

The series was cancelled at the end of 1974. But it made enough of an impression for the baby name Nakia to debut in the US popularity data for boys.

Given the character’s backstory, it stands to reason that Nakia would have a Navajo origin.

That doesn’t appear to be the case. Instead, Nakia is a Navajo word, but not necessarily a given name. It means “Mexican.”

Switch up the spelling to Nakai, though, and the picture is a little different. The anagram of Nakia does appear as a Navajo surname. R. Carlos Nakai is a world-renowned Native American musician of Navajo descent.

Some sites give Nakai’s meaning as “one who wanders.” Others connect Nakai to Nakia.

Certainly in the American popular imagination, at least during the 1970s, the baby name Nakia must have felt like it had Native American roots.

Maybe. That seems to be based on the Greek Niketas, which does mean victor or winner. It becomes Nikita in Russian and other Slavic languages. Separately, Nikita is a girl’s name with Hindi roots, meaning house.

Another often-cited meaning? Pure, with an Arabic origin. Change the spelling to Naqia – or Naqi’a – and this seems to track. This makes the name ancient, indeed. King Sennacherib ruled the Neo-Assyrian Empire around 700 BC. One of his wives was named Naqi’a. Their son, Esharhaddon, followed his father and would eventually conquer Egypt.

That leads us to the first fictional Nakia.

In the Disney+ series Ms. Marvel, Yasmeen Fletcher plays Nakia Bahadir.  She’s one of superhero Kamala Khan’s best friends, and an inspiring, fiery character in her own right.

On the show, she’s Lebanese American; the comics made her Turkish. She’s both an observant Muslim and not afraid to challenge the status quo. In the early episodes of Ms. Marvel, we see her campaigning for a seat on the mosque board, an unusual move for a young woman.

But Bahadir isn’t the first Nakia in the Marvel universe.

If you follow Black Panther, you’ll recognize Nakia as the name of Lupita Nyong’o’s character.

When we meet Nakia in the first Black Panther movie, she’s fighting to free enslaved women in Nigeria. She’s a former Dora Milaje – the elite special forces unit – and now serves as a spy for Wakanda.

She’s a love interest for T’Challa.

The character will return in the upcoming sequel, Wakanda Forever.

In the comic books, Nakia also becomes the villain Malice. However, Malice is a name used by many a Marvel Universe adversary, not all of them in the Black Panther story.

Singer Nakia Reynoso appeared on NBC’s The Voice in 2011. Born in 1975, Reynoso may have been named, in part, for the older television series. The singer-songwriter now lives in Austin, Texas.

However, his appearance on the reality competition failed to increase the number of children named Nakia.

There’s also professional football player Nakia Griffin-Stewart, a tight end for the Cleveland Browns, born in 1996 – many years after the series’ influence had waned.

The picture that emerges is a pop culture sensation, the kind of Americana name that surfaces again and again over the years.

It reached peak popularity rank of #226 for girls in 1974. It’s possible the name’s similarity to Nicole boosted it in those early years, too. But after 1993, it left the rankings entirely. As of 2021, just twelve girls received the name.

It’s never surfaced in other English-speaking countries’ popularity charts, even though Arabic influence is heavy in England and Wales.

In some ways, the baby name Nakia feels like it belongs to an earlier moment.

Except with two very different, but equally powerful, characters answering to the name in popular Marvel franchises, it’s easy to imagine parents considering Nakia, especially for their daughters. They’re smart, strong, and principled – and that feels like it makes them worthy role models with the potential to inspire parents.

Would you consider the baby name Nakia? 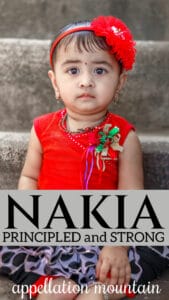 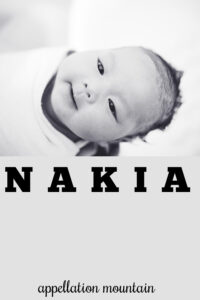