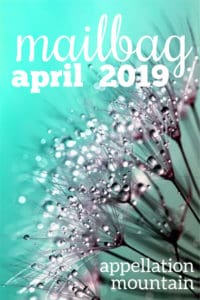 Time for the April 2019 Mailbag! You ask questions … and I try oh-so-very diligently to answer them.

Was there ever a prince named Crispin?

Fiction must have given us one, right?

A little bit of digging turned up one: The Witcher Saga, first written in Polish by Andrzej Sapkowski and since translated into dozens of languages. It includes a character named Crispin. He’s illegitimate, but his dad is Prince Amavet. So maybe that’s one regal bearer of the name. The series has inspired adaptations on television, film, video games, and graphic novels. Netflix will unveil a new series, featuring Henry Cavill as the lead in The Witcher sometime this fall. And yet, Crispin seems like a minor character – so unless this show spawns a Game of Thrones-like following and spans a half-dozen seasons, I’m not sure if we’ll ever Crispin on screen.

I found a few dozen more real-life Crispins, and other fictional ones, too. But not a prince among them!

It could make a spectacular name for a fairytale prince, though.

What are some stylish takes on Lily?

My favorite, hands down, is Lilou. It might be a super old-school medieval French form of Lily. Or maybe it’s a smoosh of Lili and Louise. Either way, I think it’s darling.

But darling might not be good enough for a child’s formal name. I’ll also suggest:

You might also consider Lilia, Liliana, or similar names. They’re all long and lovely elaborations. But they give me pause, if only because they blend in with a host of popular choices: Layla, Eliana, Alaina … and so on. Gorgeous choices, yes. But maybe not the stylish stand-outs you’re after.

If it fits your style, I think the unexpected ‘o’ sound in Liliosa makes it one of the most appealing possibilities.

How would you spell Meeka?

I tend to think of it as Mika, though. Maybe because we pronounce Mila with a long ‘e’ sound, too. Or maybe because there’s a Japanese feminine name spelled and pronounced exactly the same.

But it’s easy to mix up Mika with Micah, as well as all of those Mc- names for girls. Mikaela might be Mika. It might work for Mackenzie or similar choices, too. Those might be pronounced like Mike-with-an-a.

The -ika spelling ranks higher, too. 200 girls were named Mika in 2017. Some credit might go to Mika Brzezinski, the journalist and MSNBC talk show host; there’s also a Walking Dead character by the name during the fourth season.

One last option: Mieke is a Dutch nickname for Maria, pronounced just like Meeka and Mika. But I doubt you’d want to go there. (Unless, of course, you were of Dutch heritage and didn’t mind a lot of let-me-spell-it-for-you.)

Overall, I’d go with Mika. While it’s likely to cause the occasional pronunciation headache, I think it works well given our affection for Mila.