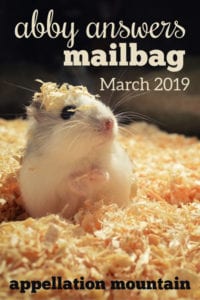 Got a question too short for a #namehelp post and too long for Facebook? Or something a little quirky, only kinda-sorta related to naming an actual kiddo? That’s why we have the March mailbag.

March 2019 Mailbag: I love the name Aderyn, but I’ve learned I’m saying it wrong. Can I still use it?

Some people can be rather rules-y about it, and I do understand. No one enjoys hearing a name butchered. If you borrow from another culture or language, it’s worth investigating how your favorite name would be pronounced originally.

But none of that means you’re hidebound to use the information you find.

Consider this: we often borrow words, including brand names and personal ones, in English. (It works both ways, with English words imported into other languages at a furious rate.) We often try to be faithful to the original pronunciation. But it’s never identical.

I don’t say Tegucigalpa the same way as a native Honduran. Given my limited Spanish skills, that’s not even possible. Luckily, there’s broad agreement about an acceptable way to say the name in American English.

And that brings us back to Aderyn. It’s so very rare – outside of Wales, at least – that nearly no one in the US will be familiar with the Welsh pronunciation. You’re free to pronounce the name as you like. I assume you’re saying it more like Adelyn, rather than ah DE rin, right?

I feel like that’s the default in American English, the one that I’d default to without any additional information. And I think, given how incredibly rare the name is in the US, it’s the only logical choice.

Are there any drawbacks?

Sure. Your daughter might go grow up and study in Cardiff or Aberystwyth. Or move there. Your new neighbors could be from Wales. Or some new television series will introduce the name to the population at large, with the authentic Welsh pronunciation, thanks to the brilliant crime-solving ornithologist, Dr. Aderyn Sky.

It’s all impossible to predict.

But it wouldn’t stop me from using Aderyn, and pronouncing it in the way it makes sense in the US today. 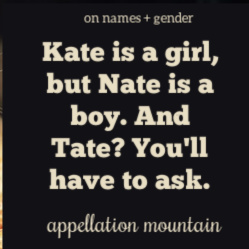 In American English, the primary driver that determines a name’s gender classification is use. Elizabeth has been a girl’s name for generations, and for ages, we’ve only used James for boys. A handful of boys named Elizabeth won’t change that.

Spelling matters sometimes. Over the years, we’ve decided that Francis is masculine, but Frances feminine.

Laken is a modern name. There’s just not much history behind it, not until a soap opera character dating to 1984.

Most of the time, we think that names perceived as feminine are considered off-limits for boys. Laken doesn’t fit that pattern. By the 1990s, it was used in sufficient numbers for girls to make the Top 1000. Then it faded for girls, but continued to grow in use for boys.

The pattern holds for other spellings, too. Laiken was given to 84 girls and 45 boys; though Lakyn and Laikyn remain mostly feminine.

So for now, a Laken is more likely to be a girl – but that could change, and I’d say it works nicely for either gender.

March 2019 Mailbag: Which rock star was named after a hamster?

I almost skipped this one, but I felt like it deserved a prize. It takes the prize for the weirdest question ever. Plus, it meant I could choose a super-cute hamster pic for this post.

No prize, but hopefully I’ve found the right answer.

Way back in the 1970s, at the birth of the punk scene in London, a group of musicians managed by Malcolm MacLaren became known as the Sex Pistols. When one of the early members departed, lead singer Johnny Rotten brought in John Simon Ritchie to fill the empty spot.

Ritchie became Sid Vicious, the story goes, thanks to Rotten’s hamster. It bit Ritchie, who said something like, “Your Sid is vicious.”

Why, precisely, Rotten kept a pet hamster I cannot say. Apparently, he named the hamster for Syd Barrett, of Pink Floyd fame. Rotten was known for declaring his disdain for Pink Floyd, though it  may have been more of a stunt than fact.

There ends the story of a rock star named for a hamster, a tiny footnote in the tragic tale of Sid Vicious.

Lest you wonder if anyone is naming their sons Sid, the answer is mostly no. Actor Jason Biggs named his first son Sid back in 2014. But in 2017, a mere 14 boys were given the name. So it’s rare, but I think the backstory fits. It’s a little bit cuddly, a little bit punk rock.

Image by metalboy25 from Pixabay