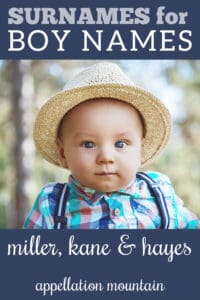 Surname names for boys aren’t new – not even a little!

Families have long handed down mothers’ maiden names. Surnames that emphasized a connection to a powerful or influential family member were once common, too.

While those reasons remain,  plenty of children receive surname names that aren’t directly borrowed from an ancestor. Maybe the parents are reinventing another family name. Or they admire a famous bearer of the surname – no relation.

Often, it’s simply because the style has considerable appeal. With names like Lincoln, Cooper, Carter, and Jackson so popular, what’s next?

Let’s look at some of the most popular last names as first names for our sons.

It’s surprisingly difficult to decide what counts as a last name, and which feels like more of a first. These names appear in the current US Top 100 and feel like they’re familiar as surnames, too.

Originally a surname given to a bowman, there’s a sharpness to Archer. Approachable nickname Archie softens it.

The NFL’s Baker Mayfield helped put this name on parents’ lists originally, but the bright long A sound and -R ending help, too.

A little bit river bank, a little bit cash money, Banks is a fast-rising S-ender, following favorites like Miles into wider use.

Football fans probably know this Texas university,named for Judge Robert Emmett Bledsoe Baylor. It followed favorites like Bailey and Taylor into the spotlight.

From the French phrase bel ami, Bellamy means “beautiful friend.” While Belle names tend to be feminine, this gained as a baby boy name thanks to a character on popular sci fi series The 100.

Boone is a good last name – literally.  It comes from the French bon, meaning good.

As in the knife, named for American frontiersman Jim Bowie, or, more likely, as in legendary musician David Bowie. The latter named himself for the former.

Tom Brady powered his surname name to the top of the charts, the name spiking as the New England Patriots racked up Super Bowl wins. At the time, Sex and the City introduced baby Brady, son of Miranda Hobbes. The name briefly reached the US Top 100, before falling again. But now it’s reversed course and rose in 2021 – just as Tom Brady decided not to retire and Miranda Hobbes returned to the small screen in a SATC sequel, complete with a teenage Brady.

Frontiersman Jim Bridger’s name dots the map throughout the Mountain West, and so his surname has always fared best in those states. But lately it’s far more mainstream, perhaps thanks to our love of ends-with-R names for our boys.

Rugged and capable, Briggs benefits from that stylish ‘s’ ending. It comes from an Old Norse word meaning bridge, an appealing image for a child’s name.

A poetic surname name that feels fresher than Bryan or Bryce.

The surname literally means “clerk,” and some Clarks – think Kent – have had a quiet, even serious image. But Hollywood legend Clark Gable was dashing; trailblazers Lewis & Clark were adventurous; and lately Clark feels like all of the above.

Originally a surname for someone who tended horses, Colter now feels like an update to long-popular Colton.

Add a NI to Colson, and you might guess at the name’s origins. It likely comes from Nicholas’ son or Nicholson. Today, though, it sounds fresh and new. The name has powered up the popularity charts in recent years, an update to Colin.

An animated boy genius wore the name. Then a clever serial killer. But Dex seems to be overcoming all of that, a stylish sound with a cool, retro image.

One of many Fin- surname names that appeals to parents looking for another syllable or two. Popular for boys and girls alike, Finley is among several gender-neutral surname names on the rise.

An upbeat Irish name that shortens naturally to Finn.

As outdoorsy as River or Forrest, Fisher also sounds active. But it’s not just a sporting name. It’s also a spiritual one, thanks to the New Testament. Jesus tells his first disciples – who were actually fishermen by trade – that he will make them “fishers of men.”

It means red, but this Irish surname brings to mind the very blonde Flynn Ryder of Disney’s Tangled fame.

Ford might refer to the part of a river shallow enough to cross. But thanks to early industrialist Henry Ford, it’s very Detroit Motor City today.

Forrest Gump was a wildly successful movie in 1994, and the name briefly jumped in popularity. But then Forrest faded. Today, it’s making a comeback, thanks to its surname style, and its ties to the natural world.

The meaning is wrapped up with farming, but Granger also brings to mind the smart, brave Hermione.

With Grayson and Greyson in the US Top 100, no surprise that Grey is also faring well. It’s part-surname, part-color name, and immediately familiar thanks to long-running medical drama Grey’s Anatomy, featuring Dr. Meredith Grey.

The bright ‘a’ sound coupled with that  ‘s’ ending make Hayes sound like a popular name. It’s caught on like wildfire in recent years.

We’re wild about Jackson, but this John-related surname has stayed under-the-radar … until now.

Cnocc is an Old English word for a hill. But for many of us, it’s all Fort Knox – officially, the United States Bullion Depository, where the US government stores reserves in the form of gold.

The late actor Heath Ledger might get some credit for this name’s popularity. But it also fits with all -R ending boy names we love.

A Scottish surname boosted by that final X.

The phrase “the real McCoy” makes this name feel just a little bit cooler. And while many Mc names are used for our daughters, McCoy trends masculine.

Just like Carter or Taylor, Miller started out as an occupational surname name; it referred to someone who milled – ground – grain for flour. The beer association might make some parents pause, but with a generation of Hunters and Parkers, Miller fits right in.

A unisex name across the ages, connected with Morgan le Fay and Morgan Freeman, this name surged for girls in the 1980s and 90s, but held steady for boys at the same time. (That’s peak Morgan Fairchild, when the actress starred on Falcon Crest.) Today the name is rising in use for our sons once more.

In Middle English, the phrase atten ash meant “at the ash tree.” It evolved into place name and surname Nash. In the 1990s, television gave us police drama Nash Bridges, starring Don Johnson as the title character, and the name slowly caught on.

At first glance Palmer is yet another ends in -R surname option. But, like Fisher, it has a spiritual side. That’s because Palmer was the name given to those who went on pilgrimage and returned, carrying palm branches.

Also spelled Reid, this name comes with many potential origins and meanings, including red, roe deer, and clearing. It’s strong, clear, and timeless.

Probably a cousin to Ridge, Riggs sounds rugged. It might also come from the Germanic element ric – meaning powerful, which just reinforces the image.

Clearly an occupational name, Shepherd also has spiritual possibilities, since Christians often depict Jesus as a benevolent shepherd. Still, it tends to read more like a polished, prep school-ready choice than an overtly religious one.

Born in New Jersey, John B. Stetson was the son of a hatter. He headed west, like so many young men, and designed a hat suited for life on the frontier. It made him a fortune, and made his name synonymous with Old West style.

Actress Sutton Foster launched her unusual given name into the US Top 1000 for girls. It has since followed – and quickly! – for boys, too.

A surname name originally spelled Trewhitt, it looks like a formal name for True. That makes this a virtue pick and a surname one, too.

Like Miller, a surname name of recent discovery. Real life and fictional figures answer to the surname, like Pirates of the Caribbean’s Will Turner.

Surname names have always filtered into use as given names. Wallace is an early borrowing, a Scottish name made famous by William Wallace. He fought for Scottish independence, his story retold in poems, novels, and the Oscar-winning movie Braveheart.

Country music’s Walker Hayes scored a hit in late 2021 with “Fancy Like.” It probably helped boost Hayes, and no question it gave a lift to Walker. So did the reboot of television series Walker, Texas Ranger, which found new life with star Jared Padalecki in 2021.

Nineteenth century detective Sherlock Holmes has been in the spotlight in the twenty-first, thanks to multiple reboots and re-imaginings. Companion Dr. John Watson has come along for the ride, helping this on-trend surname enjoy greater use as a given name, too.

There’s something about Wells. It sounds tied to the natural world, but also well-being. Plus, it sounds like traditional Will. No surprise it’s racing up the charts.

A name that sounds outdoorsy and the life of the party, too, Wilder fits in with so many -R ending favorites, while still standing out.

This name brings to mind ice hockey, thanks to the Calder Trophy given annually to the rookie of the year, as well as artist Alexander Calder.

A Scottish possibility that could follow Cameron into wider use.

It sounds like a tough guy, and indeed Deckard does mean strong. The related Decker is another, less subtle, option.

Another Scottish name, playful Duncan brings to mind yo-yos, donuts, and Shakespeare, too.

Or Fielder or Fields, any of them names that feel gently outdoorsy, just like Parker.

A philosophical surname, familiar to readers of Calvin and Hobbes … as well as Fast & the Furious fans, thanks to Dwayne Johnson’s character, Luke Hobbs. It comes from old Robert nickname, Hobb.

A name that brings to mind the surfing lifestyle brand, making Hurley feeling daring and adventurous.

Like Jackson and Jones, yet another surname derived from mega-popular given name John.

A buttoned-up surname name once familiar thanks to the Family Ties television series.

As in enduring poet Langston Hughes of the Harlem Renaissance.

Former US President LBJ was Lyndon Johnson; Linden is either another spelling, or a completely different name. It’s often associated with lime trees, making Linden an alternative for Rowan or Ash.

An upbeat Irish charmer, Murphy is rising for our daughters and would work every bit as well for our sons.

A brief name, Shaw also gets a boost from a character in the Fast & Furious franchise.

An ends-with-son name that has been consistently overlooked, even as Jackson and company soar.

A gentle surname name that brings to mind 1970s television staple The Waltons. As the series fades from memory, this could be a way to reinvent Walter or an alternative to mega-popular Walker.

Are any of these surname names for boys on your shortlist?