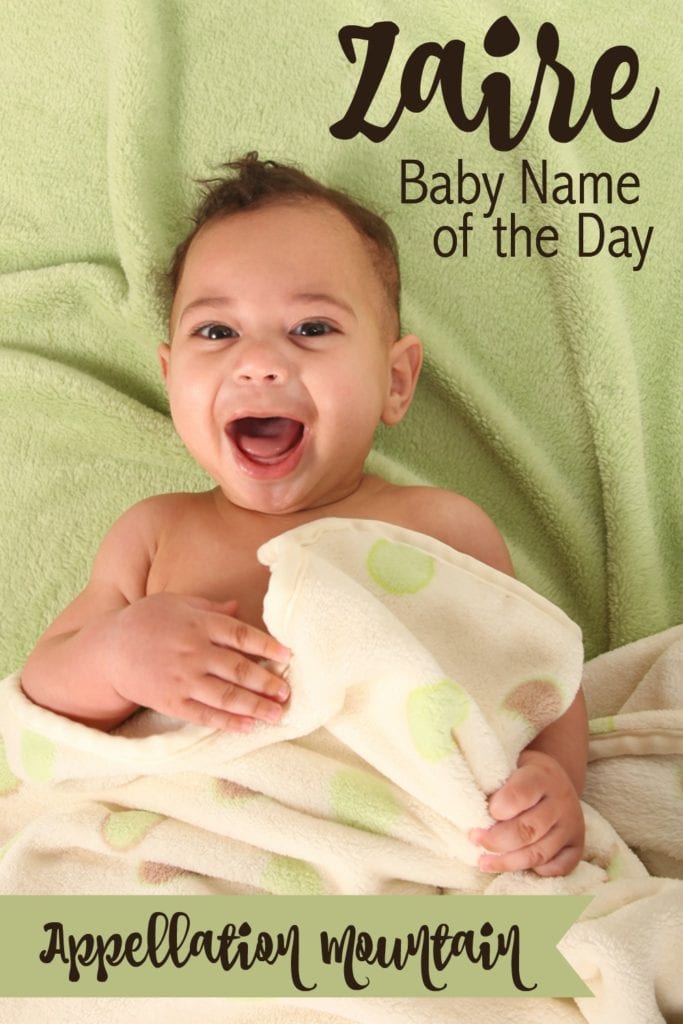 Zaire is a place name that you won’t find on a current map.

Thanks to LynZ for suggesting our Baby Name of the Day.

Between 1971 and 1997, you could find Zaire on the map, in Central Africa. Look a little closer, and you’ll find the Congo River winding through the land, the second largest river in the world.

Kongo is a Bantu language spoken in Central Africa. In Kongo, nzere means “river that swallows all rivers.” Nzere became Zaire in Portuguese and the name stuck in French, and eventually in English, too.

The country is now the Democratic Republic of the Congo. With a population of more than 79 million, there are more native French speakers in the Congo than in France.

Europeans first explored the region in 1867. King Leopold of Belgium was eager to establish a colony. His government declined. Instead, the king set up a philanthropic association to benefit central Africa – and turned it into a massive land grab.

The results were horrific.

In 1960, the Belgian Congo finally became the independent Democratic Republic of the Congo. In 1971, Mobutu became president – and dictator – of the country.

He renamed it Zaire in a bid to eliminate colonial influences – overlooking the name’s mix of native and European influences.

Mobutu was overthrown in the 1990s, and the nation once again became known as the Democratic Republic of the Congo.

There’s another origin for the name.

In 1732, Voltaire’s tragedy, Zaïre, debuted in Paris. The title character is a Christian slave during the time of the Crusades, raised in the palace of the Sultan of Jerusalem.

Her name may have been based on Arabic names like Zahrah or Zahra, but I couldn’t confirm.

Zaire and the sultan have fallen in love and plan to marry. But just then, funds are raised for the release of the Christian hostages.

Zaire insists she does not need to be rescued, but the party sent to negotiate their release includes her birth father, who recognizes his long-lost daughter. The Christians are aghast at her plans to continue with the marriage and convert to her husband’s Muslim faith.

The play was a success. Aaron Hill translated it into English as Zara: A Tragedy and it was often performed in English, too. It inspired at least a dozen operas, and plenty of revivals over the years.

Zaire: By the Numbers

Voltaire’s story doesn’t seem to have encouraged the use of the name, though Zara was in sparing use in the nineteenth century.

Instead, the name first caught on in the 1970s, possibly because the African nation was in the headlines. The timing suggests it was one of the names African American parents considered as a heritage choice.

It’s first recorded in 1974 as the name of seven newborn boys.

The numbers look the same in France, too. It’s very rare, but is used more for boys.

As of 2014, the name ranked #901. It’s fallen in recent years, but remains a stylish place name option for a child. While it’s much more popular for a boy, the ties to Voltaire’s tragedy could make it an intriguing choice for a daughter, too.

What do you think of Zaire?