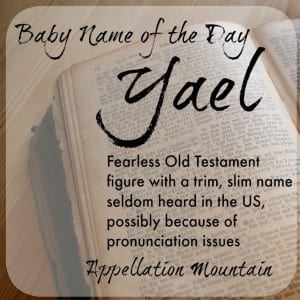 Looking for a Biblical rarity less popular than Rachel, but not as elaborate as Zipporah?

Today’s choice might be one to consider. Thanks to Kenneth for suggesting Yael as our Baby Name of the Day.

The Bible is filled with strong names for girls.

In the Old Testmaent, Sisera is the captain of the Canaanite army, serving under King Jabin. They ruthlessly oppressed the Israelites for years.

Then, Barak and Deborah defeated Sisera’s army in a huge upset. Sisera fled, and found himself at the tent of Yael and her husband.

She extended hospitality to the captain, feeding him well and inviting him to sleep.

While he was sleeping, she hammered a tent peg into his skull with a mallet.

And that was the decisive end of the oppression.

Her gory story is told in The Song of Deborah, often considered one of the oldest parts of the Bible and an early example of Hebrew poetry.

Both Deborah and Yael were fierce, strong women, but while Deborah has been in steady use over the centuries, her sister-in-arms has always been quite rare.

The meaning of this name is usually listed as goat – not necessarily negative, but less appealing than some bird names, or others like Tabitha – gazelle – or Ursula – bear.

Dig a little deeper, and the creature identified with this name is a Nubian ibex.

If gazelles are fair game for naming girls, the ibex is at least as worthy.

The first thought you might have isn’t from the animal kingdom, but the world of higher education.

But Yale does confuse the pronunciation, because just as Cael rhymes with Kale, Yael is often assumed to rhyme with Yale.

The name is pronounced yah ELLE. Respelling Yaelle could make it clearer that the name isn’t a creative respelling of Yale – but sacrifices some authenticity.

Yael is still in use as a girl’s name in Israel.  It’s listed in the Kveller database. Herman Wouk used the name for a character in his 1993 historical novel The Hope, set in Israel in the mid-twentieth century. There’s also a Yael in Alice Hoffman’s 2011 novel, The Dovekeepers, set in 70 BC.

Would you find a Yael or a Jael in the US?

Despite history galore linking this name to a Biblical heroine, and a longer history of use for girls than boys, Yael seems to be leaning boy in the 21st century. In fact, the name ranked #867 for boys in 2013.

Proof that name borrowing goes both ways? Maybe. But Israeli baby names are often unisex. I couldn’t find a great explanation of why that’s so, but there’s definitely discussion of the phenomenon. A hint comes in this article: girls’ names which become boys’ names are grammatically masculine.

Overall, Yael remains an underused gem – but it’s worth noting that your daughter Yael might meet boys with the same name.

What do you think of Yael? Is it ready for wider use in the US, or does this one seem too obscure to consider?