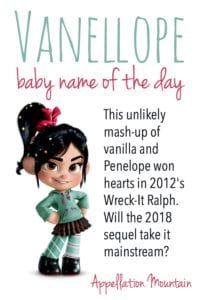 Vanellope von Schweetz appeared on the scene at exactly the right moment. Could her invented name catch on?

Our Baby Name of the Day was inspired by the upcoming Ralph Breaks the Internet: Wreck-It Ralph 2.

Nine times out of ten, a pop culture innovation can claim some roots.

Sure, Bewitched introduced Samantha and Tabitha to a wider audience, but both names predated the paranormal sitcom. Girls were named Aria before Pretty Little Liars – and Game of Thrones – put it on parents’ shortlists. And Luna ranked in the US Top 1000 ages before Harry Potter became a permanent part of pop culture.

But Vanellope counts as a straight-up creation.

In 2012, we met Disney’s Ralph, an arcade villain who decides he’s tired of being bad. Ralph goes on an adventure, wandering through other video games, forcing the hero of his game – Fix-It Felix – to pursue him across universes, lest their game be permanently unplugged.

Ralph lands in Sugar Rush, a kart racing game in a land ruled by King Candy. He meets sassy and strong-willed Vanellope, but learns she’s a glitch – a flaw in the system, not meant to be there. The glitch wants nothing more than to become a playable character, eligible to race a kart of her own.

If you want to keep the ending of Wreck-It Ralph unspoiled, skip this section!

At the end of the adventure, Ralph and Vanellope successfully build a kart, save the day, and win the race. That’s when we learn that King Candy is an imposter, and the real crown belongs to the glitch.

Yup, Vanellope ends the movie as a princess, the rightful ruler of Sugar Rush.

The movie sets us up to like the character, and, by extension, her name. After all, she uses adversity to her advantage and triumphs over impossible odds. Sarah Silverman voices the scrappy heroine.

But let’s look at that name.

And yet, Vanellope feels original. We’re used to invented names with -anna, -ena, and -lina endings; a name based on Penelope comes as a surprise.

The letter V features in plenty of popular – and rising – names today, too. From Top Tens Ava and Olivia to fellow Top 100 names Avery, Evelyn, Savannah, and Eva, and V-starters Victoria, Violet, and Vivian, V powers many a popular choice.

Vanellope: By the Numbers

Those numbers keep this Vanilla-Penelope smoosh in the rarities column. And yet, they’re pretty respectable for an invention. Renesmee fared slightly better, but then, you could argue that Twilight made far more noise than Wreck-It Ralph – and has had more years to catch on.

No question this name succeeds on sound. And yet, I wonder: is Vanellope too clearly tied to the movie franchise to feel like a reasonable name for a child? Right now, it feels more like a Halloween costume, complete with the licorice hair tie.

But don’t count Vanellope out. Just like the character leapt from glitch to hero, this name might just crossover into the mainstream.

What do you think of Vanellope? Would you ever consider a freshly invented name?