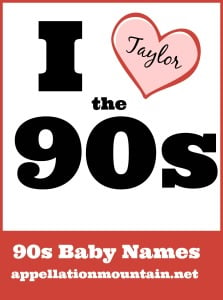 Some very well known women have answered to this name.

90s Week continues with Taylor as our Baby Name of the Day.

Like nearly any surname name, Taylor has a long history of sparing use as a given name.  It’s traditionally more popular for boys, but has plenty of history on a girl, too.

So this makes Taylor a hero name.

But she doesn’t get credit for the name’s success.

Taylor first charted in the US Top 1000 for girls in 1979, when Liz’s career was on the wane, and her humanitarian activities weren’t well known.

So what explains the name’s success for girls?

In 1979, Taylor Miller debuted as Nina Cortlandt on All My Children.  Born Linda Taylor Miller, the actress would play Nina for five years straight, and make cameos through 2010.

Miller might have raised the name as a possibility, but it was the perfect moment for Taylor.

If our age is dominated by talk of hipsters, the 1980s were all about yuppies.

Taylor fit right in – fresh, boyish, definitely not a Baby Boomer name.  Some yuppie picks were super-classic, like Caroline or Katherine.  But the names that defined the generation were tailored choices with a twist: Megan, Lauren, Alexis, Caitlin, Whitney, Madison, Chelsea, Justine. Other associations from the decade:

Of course, this name was also big for boys in the decade – it was a Top 100 name from 1988 through 1997.  Actor Taylor Lautner was born in 1992 – leading to the interesting possibility of boy Taylors dating girl Taylors, like the much-publicized romance between Lautner and Swift.

Good news, though – despite the former couple’s shared first name, the earth continues to rotate.

Today, Taylor is slipping, currently ranked #59 for girls, and #371 for boys.

With grown-ups like actress Taylor Schilling, who plays Piper on Orange is the New Black, in the spotlight, this name feels all grown up.

File this name with Shirley, Kimberly, Kelly, Ashley, and Madison – surnames that migrate to first name.  Once trendy, surprising, even controversial, now they’re just names – our babysitter, our brother’s prom date, the newest hire in your office.

What do you think of Taylor?  Better for a boy or a girl?  A trendy name fading fast, or a new staple?