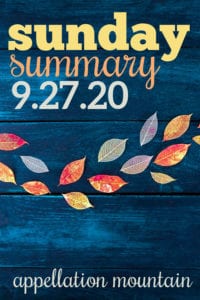 There are a zillion ways to be criticized. I mean – for anything, really. But parenting, in general, tends to trigger strong opinions, ones that we sometimes feel perfectly entitled to offer. (Nevermind whether we were asked.)

I kind of get it. It’s like when Amy Poehler’s character names her baby Stefani – like Gwen, not like Stephanie – at the end of Baby Mama. Or Princess Beyonce, the original name of the baby on early 2010s sitcom Raising Hope.

But often the criticism is aimed at any name that’s not a Top 100 favorite or a classic choice. Or the name actually is a Top 100 favorite … it’s just not familiar to someone who was raising a family fifteen or forty years earlier.

Regardless, here’s my question: what’s wrong with trying?

Yes, we live in an era where we like to pretend that Instagram is real. We value style over substance in a way that’s sometimes quite painful.

But if names are important to us – and the fact that I’m able to write this suggest that they must be, then why is so wrong to put in the effort?

Sure, the name you ultimately choose might be very different from what I’d choose. But I’m guessing it will be perfectly right for your family. And that’s sort of the point, isn’t it?

Tell me: am I missing something? Or are we all just a little too quick to criticize names that aren’t on our personal short lists?

A solid list of different-not-weird names including a few that I find myself recommending – maybe too often! Not a try-hard name in the bunch.

And then there’s Caradoc. It’s a long-time favorite of mine, and I was just mulling it over when Bree posted this profile. I mean … wouldn’t it be wonderful, with Cary as the nickname?

Check out these sister names from the birth announcements at British Baby Names: Cecily Mabel Alma, Ottilie Fleur Harington, and Clemency Lily Lawrence. It really doesn’t get any better than that.

I loved Clare’s list of Spanish word names. After working on my Spanish for six solid months, it’s finally getting not-awful. So that made this list doubly appealing.

Laura’s take on baby name trends from the new data is well worth a read. That’s even more true as we’ve been debating whether Forrest is too tied to the Confederacy; she doesn’t mention that name specifically, but has some thoughts on the broader issue. 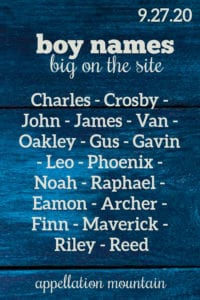 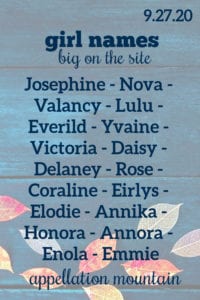