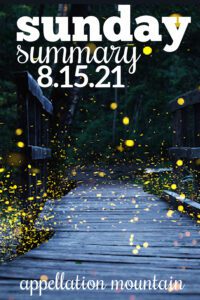 Just like everyone else, I’m obsessed with Ted Lasso. My husband remembered the NBC Sports promos. We binged the first season a while back, and we’re loving the second season.

But ever since the first episode, I’ve also been thinking about a possible impact on names.

Because ofcourse I am.

Here’s my take so far:

Juno could be the breakaway star. This isn’t a show like Game of Thrones, with lots of otherworldly choices, or even Downton Abbey, reviving names from another era. Most names are immediately familiar and accessible. But the actor Juno Temple, who plays Keeley, might finally push her name from out-there to just-inside the mainstream. After all, June, Juniper, Margot, Willow, and Cleo are all rising favorites – plus plenty of goddess names, like Artemis and Athena. Why not Juno – at last?

As far as character names go, Jamie is the one I’m watching. It will be tough to unravel Jamie from James-called-Jamie … or even Jameson called Jamie. But given our love of Charlie (and Archie and other casual nickname names), it feels like an obvious one to watch.

But I think the Ted Lasso naming trends could be bigger and broader.

Ted is likeable. Yes, he’s corny and optimistic and sometimes clueless. But he’s good. Kind-hearted. Sincere and able to forgive, determined to see those around him succeed, too.

In a fractured age, Ted Lasso invites us to believe in overcoming our differences while standing up for what we believe. It’s fiction, of course – but it’s not fantasy.

Too much to read into a dramedy? Maybe. But I can see two big-picture trends emerging:

More American parents embracing cozy nickname names. They’re favorites in the UK – just look at Harry, Jack, Charlie, Alfie, Archie, Theo, and Freddie, all in England’s Top 20. I’m not sure if we’ll hear more of Roy and Ted specifically, but it could push us even further towards using a different kind of homespun name. Less Maverick and Legend, more Arlo, Emmett, and Gus.

Parents may seek different qualities in names in general. Some hear a name like Benedict as rather grand and important, while others will find it humble and sincere. So even while I’m confident that names like Arlo and Emmett will rise, it’s worth noting that the same name can suggest different images to different parents. But, broadly speaking, I wonder if our wish for highly individual names will be married with something a little more nuanced – highly individual names that feel deeply and meaningfully connected to our values and beliefs.

It’s not that Ted Lasso changed the minds of parents, exactly. But could a collective yearning for a kind of big-hearted, optimistic-against-the-odds approach to living change the way we think about our children’s names?

I’m sure it could. What do you think?

ELSEWHERE ONLINE (AND OFF THE FOOTBALL PITCH)

400 years of French baby name data. I mean … just in case you have a spare seven or eight hours to kill.

For a much shorter time horizon, here are the current favorites in Spain. Lucia and Hugo come out on top for the second year running.

I stumbled on this actor while searching something else on IMDb: Saginaw Grant. It made me think Michigan. It turns out the place name comes from the native Ojibwe language. Grant was born in Oklahoma, and in addition to acting, served as Hereditary Chief of the Sac and Fox Nation, an indigenous people originally displaced from Michigan. Saginaw has never been given to even five boys or girls born in a single year. Fascinating.

The most unisex names in every state based on Nameberry’s analysis. I’m not sure this tracks with my experience, but none of them seem implausible.

Okay, that’s enough wild speculation and name-gazing for one week! If you’d like more of the same every Tuesday, sign up for my weekly newsletter here: 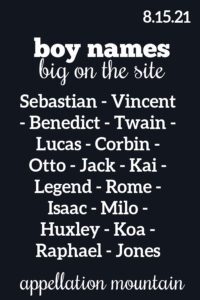 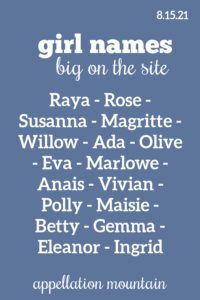