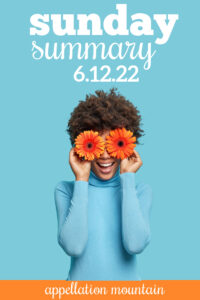 Here’s something that throws me, even after all these years I’ve been writing about baby names:

We use terms to describe styles in inconsistent + sometimes incorrect ways.

“Our kids have traditional names, Liam and Ava.”

“We want to avoid trendy names like Henry and Charlotte.”

But then again, this isn’t a science.

Depending on your perspective, maybe Liam does feel traditional. And I do understand how Lyla might seem unique.

In fact, when the categories get much bigger, it’s easy to argue that anything fits. My recent round-up of bohemian names took forever. Because after a few hours, everything starts to feel boho. Well, not Catherine or David. But so many names that my completely non-bohemian self could happily name triplets from the list.

Don’t tell me your style. Tell me the names you love.

Instead of using terms to describe our style, I think it’s often more useful to list the names that we love. (Yes, even if we can’t use them for one reason or another.) Because the same parent can love Scarlett, Grace, and Piper. They’re names with no obvious overlap, but I can hear a thread there – right?

Are your favorites nickname-proof or nickname-rich? Tailored or frilly? The kind of names with a clear image attached? Ones with an obvious history? Or are they a little more of a blank slate? Will they be hard to spell? Have more than one pronunciation?

Because there’s always a reason you love Huxley and William, a name that falls somewhere between Scarlett and Elladora.

Start with the names.

Country music’s Sam Hunt welcomed a daughter with wife Hannah Lee Fowler. They named her Lucy Lu. This confuses me just a little, because any daughter I named Lucy would inevitably be called Lucy Lu at least some percentage of the time, so I’d definitely choose a completely different middle name. That note aside, I’m intrigued by the multiple ways to spell this mini name. I’ve seen Lou, Lue, and now Lu, too. Quite a bit of variety for a single syllable!

I so enjoy SJ’s name videos! For so many reasons, but particularly because it’s so fun to hear the differences between British and American perspectives. If you’re naming a boy and love old school, antique picks, this video is worth a watch. Also – yes to Vincent and Chester and so many of the names she mentions!

Rumor has it that Kylie Jenner’s son is named Knight. Which I completely love, and don’t think it’s too extreme at all in our age of bold word names. (The rumor started with an Instagram account that may or may not belong to Kylie’s nephew, Mason.) While it’s time to update the list on this post, my opinion stands – love the names or hate them, the Kardashians actually get a lot right when it comes to names.

A must-read for the parents of every Alexander out there. I’m guessing that you already know about Alexander and the Terrible, Horrible, No Good, Very Bad Day, but this interview with Judith Viorst about the real-life Alexander made me love the story – and the name! – a little bit more. (And since it’s my son’s name, I didn’t think that was possible.)

To me, Waterloo is a catchy ABBA song, but it would have meant something very different to families who served in the June 1815 battle. Nancy’s round-up of babies with the (mostly middle) name Waterloo reminds us that names record all sorts of events, tragic and happy alike. The personal stories behind some of the name choices are fascinating. (Scroll all the way to the bottom to read about Isabella Fleura Waterloo Deacon. Can you imagine?!)

Can’t get enough name news? Sign up for the newsletter, sent every Tuesday: 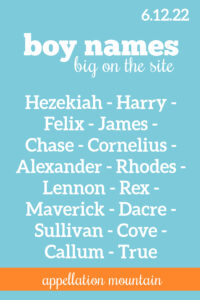 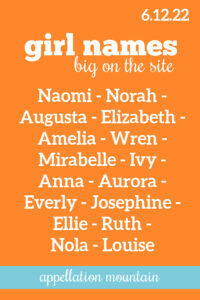