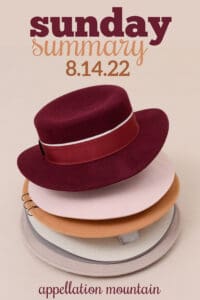 Okay, I get it. (And thanks to everyone who sent it my way.) McKeinsleigh Graycynn is a lot.

It’s putting a hat on a hat.

In comedy, putting a hat on a hat means layering a joke on top of another joke. It ruins the impact of the original, and makes the whole thing less funny.

More broadly, it can mean complicating the plot in fiction: She’s an orphan who developed the power of telekinesis in the same car crash that took her parents’ lives. AND those parents were top secret CIA operatives involved with a plot to hide the existence of alien life on Saturn.

It’s just much too much. An extra layer that weighs everything down.

In naming, it doesn’t happen as often as you might guess.

Searching through the US data for any name given to at least five girls in a single year, I couldn’t find McKeinsleigh or McKinsleigh. There were 13 McKinsleys born in 2021, but that feels like a manageable name.

Creativity is amazing. Self-expression matters. But restraint is a wonderful thing, too. I suspect that most parents do their best to find balance.

It’s not always obvious when you’ve put a hat on a hat.

So I’d suggest this: try paring back some element of the name. Does it have more impact with one less syllable/a more streamlined spelling? Or has something been lost?

I’d take Nora Maddalena over Nora Madelyn. You might settle on Nora Madeleine, or even Nora Mae.

And that is perfectly fine.

What names are actually given to boys and girls in nearly the same numbers? Nancy has all the data. One possible takeaway: Parker is about to be everywhere. River and Charlie, too.

This remains one of the most popular #namehelp posts ever. And yes, there’s an update!

We need to talk about Kevin. It’s a whole thing in France – and Europe, more broadly. Kevin is viewed as vulgar, an ugly American import. But the Kevins? They’re striking back.

I’ve talked with lots of families who share the same first initial across siblings, even generations – some joyfully, others reluctantly. But this is the very first story I’ve come across that all start with the same TWO letters: CH. Big sister Chanel was joined by quadruplets – sisters Chesley and Chatham, and brothers Chance and Cheston.

Can’t get enough name chatter? Subscribe to the weekly newsletter, sent every Tuesday: