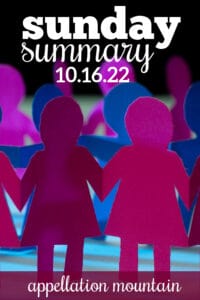 The most popular names data in England & Wales was recently released. It brings with it one of my favorite data sets of all-time: Most Popular Names by Mother’s Age.

No comparable information is published for the United States.

And yet, we all sort of know this. Younger parents tend to choose trendier names. More casual ones, too. They’re more inclined to be influenced by pop culture.

As we age, the names we choose change. We drift towards more classic names. More gendered ones, too.

It’s tempting to ask ourselves if older parents get it. If we somehow understand that time-tested names of substance will wear better across a lifetime.

And perhaps younger parents should learn from that, and name their babies Michael rather than Maverick.

It’s a tempting conclusion to draw, and yet I don’t think that’s quite right.

Older mothers often start their families later because they’re pursuing additional education and starting their careers later. It’s those qualities – educational and professional achievement – that drive the names the mothers choose, not necessarily life experience. Or, to go back even further, it’s possible that women inclined to pursue, say, the rigor of law school or a PhD in pharmacy were always going to choose slightly different names than someone who takes a different path in life.

Because what the data obscures is that the most popular names are declining in use overall. So the biggest difference is the one we can’t see. It’s that fewer parents overall choose the same names – regardless of age or socioeconomic factors.

Age matters, but I’m not sure if we understand exactly why it makes a difference.

Nancy’s look at the England & Wales data includes details about some of the more unusual choices. Yes, Cuthbert and Buddy-Bear, Kerenza and Nepheli all appeared in the 2021 data.

We talked about Enola a few days ago. It’s risen quickly in the US following the success of Netflix’s Enola Holmes series, introducing the world to Sherlock’s little sister. Turns out it’s also among the fastest rising names in England & Wales.

The most influential celebrity name of our generation? Namerology makes the case that it’s Kehlani. I think she’s right.

Speaking of singer names, will Jax lead to more x-ending girl names? Jaclyn Cole Miskanic was called Jackie until she became a singer. By the time she appeared on season fourteen of American Idol, she was Jax – and came in third. She’s making waves with a hit single called “Victoria’s Secret.” (It’s so good.) But it has me wondering … will x-ending nickname names trend for girls? I’ve always liked Bex for Rebecca …

Take Rosalie, mix in Josephine, and then add a fun table-turning Hulu original movie? The result is Rosaline. In Romeo and Juliet, she’s a barely-mentioned figure, the girl Romeo pined for up until he met his Juliet. Hulu has given her a story of her own, and it sounds amazing. So my question, naturally, is: will Rosaline step into the spotlight as a given name? Just 56 girls received the name in 2021. But if Netflix can boost Enola, why couldn’t Hulu do the same for Rosaline?