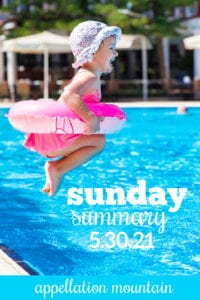 If you’re American, this weekend marks Memorial Day. It’s a study in contrasts – we’re acknowledging the sacrifice of so many for our country. But we’re mostly marking this solemn occasion by heading outside to grill and eat bomb pops.

And that’s how it goes, right? We know what matters, but we often best celebrate it by living our daily lives well.

Part of that can be choosing a name for our children, one that’s rich with personal significance.

Looking at the US name data, it can be easy to dismiss current favorites as outlandish. As parents trying too hard to find something different.

But I don’t think that’s the case at all.

Names like Maverick and Ace are virtue names – just in twenty-first century dress. We value independence. Choices like Journey and Genesis offer stylish sounds. But there’s meaning there, too – a sense of adventure, of beginnings, of possibility.

Bindi Irwin named her daughter Grace Warrior. It wasn’t because she was hoping to raise a future gladiator, but because it spoke to her family’s shared devotion to defending wildlife. Without context, the name seems like one thing, but with the story? It transforms.

We’re not so different than earlier generations, the ones who embraced Mercy and Faith, or Jefferson and Washington, for their children’s names.

The virtue names evolve, and perhaps our ideas about what virtues matter most shift over time. But the general concept of naming our children to encourage virtue? There’s nothing new about that at all.

Speaking of virtue-ish names, babies named for Eiffel Tower seem to fit in this category. Nancy has the scoop on American children named for the engineering marvel.

This is an oldie, but I found myself thinking about hyphenated first names recently. They’re tricky in the US, because each state can treat them differently. And I’ve heard all sorts of stories about how they do! But they’re big in the UK, and plenty of people love them – both for style, and because it offers a practical way to combine two beloved names.

And while we’re in the UK, let’s drop in on the latest British Baby Names birth announcements. There’s a Horatio! Plus Kit (m), Cadi (f), Ottilie Florence, and Romilly Rose. Same language, similar cultures, but oh – these names blow me away.

Which reminds me, did you see Nameberry’s look at the data on both sides of the Atlantic? Turns out a unisex name might be more or less gender neutral, depending on which side of the ocean you’re on. Charlie surprised me!

Can’t get enough name news? Sign up for Tuesday’s newsletter: