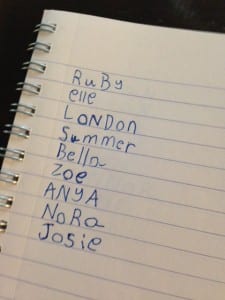 Did you keep lists like this one when you were little?

My daughter Clio is six, and shows signs of being name-obsessed. Apple, tree and all that.

It makes me wish that I had those early lists that I compiled! Would they have been filled with storybook characters? Names of people I knew? Her lists are a mix – some classmates, some from television shows. But others are pure Clio, names that she just plain likes. And that’s fascinating. 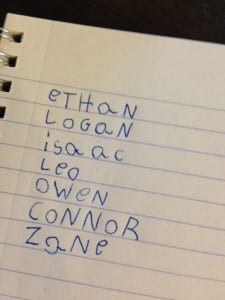 While researching Uma Thurman’s extended family – very extended – I came across the late Dashiell Snow, and his daughter, Secret. Here’s an interview with Secret’s mother, Jade Berreau. Secret Berreau might be a bold and interesting name. But her name is Secret Snow. That’s a lot of name. (Dash Snow was the son of Uma’s half-sister, Taya, so Secret must be Uma’s great-niece.) Secret’s full name is even wilder: Secret Midnight Magic Nico. I’ll admit that Secret is growing on me as a first name.

Ooh, these colorful color names! Though the color name that I’m watching most closely is Grey. Yes, Fifty Shades and all that. But it’s also the name of the dinosaur-loving younger brother with the floppy hair in Jurassic World. 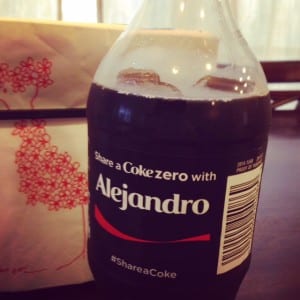 Time for the annual Gap Casting Call! The first two girls’ names I spotted? Isabella. And Isabella. But there’s also Mary, Nikhlia, and Zara, and for the boys, there’s Alvarez, Julius, and Matteo. Alvarez!