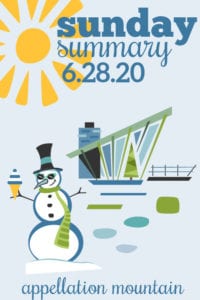 That’s the term of art for phrases like “x is the new y.” They’re called snowclones because of another phrasal template: “If Eskimos have 99 words for snow, then X surely has Y words for Z.”

(Of course, that’s a vast oversimplification of Inuit culture and language.)

But the term snowclones stuck. And so, here we are with the Sunday Summary: Summer Snowclone edition. Because lately my brain keeps generating X is the new Y phrases when it comes to all things name-related.

You can play along! I’ll start:

Sci fi is the new soap opera. For years, parents took name inspiration from the newest heartthrob/secret love child/ruthless schemer character on soap operas. We overlooked their devious natures, or their runs of bad luck that saw them abducted/in a coma/thrice divorced and focused on how much we loved the names. Now soap operas are much less of a thing. Instead, we’re all binging sci fi series like Game of Thrones and waiting for the next installment in blockbuster franchises. Enter a generation of kids called Kylo and Khaleesi, instead of Stone and Kayla.

Everly is the new Mackenzie. Every decade has a name – or three – with many, multiple spelling variations. Combined, they make a merely popular name a wild sensation. I’m not sure Everly could ever top Mackenzie or Madeline, but with multiple spellings rocketing up the popularity charts, it’s going to try.

-lani is the new -leigh. We like a good mix-and-match name suffix, something that can make familiar names just a little different. A dozen -lani ending names ranked in the US Top 1000 in 2018. Compare that to six in 2015 and two in 2010. Strictly speaking, it’s Hawaiian and means heavenly.

What would you add?

In other name newsiness:

Siblings named Scout, Calder, and Crosby. Swoon! And they’re all teenagers and up, so this family was very ahead of naming trends.

An interesting name question: is it weirder to name your child Goldie if she is blonde … or if she’s not? Swistle helped this family name Marigold “Goldie” Lennon, a sister for Judson and Willa. Love!

Do you think a kid named Donovan will inevitably be called Don? I agree with Duana – I think it’s not that likely. And I love Donovan (or Duncan) with big sister Margot.

A deep dive into Jemima from Namerology. One of Laura’s points bears repeating about any distinctive name: “A simple, ultra-common name like Ben or Andy has a teflon quality … Jemima was far more vulnerable …” But it also forced me to confront just how much racism was encapsulated into the brand name.

Rippkin is a new one, but even a non-sports fan like me recognizes the baseball reference. Dad is Brock Holt, currently with the Milwaukee Brewers, and an MLB player since 2012. Their firstborn is Griffin “Griffy” Wyatt Holt. (Wyatt is dad’s middle name, too. I assume Griffin might be a nod to Ken Griffey, Jr.?) Now they’re expecting another son, and they plan to name him Rippkin Penn. Guessing Rippkin comes from Hall of Famer Cal Ripken, Jr., while Penn is from mom’s maiden name, Pennington.

That’s all for this week. As always, thank you for reading – stay safe and sane, and I’ll see you soon! 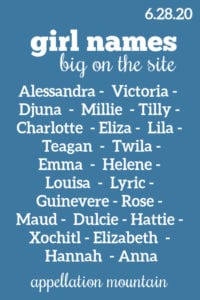 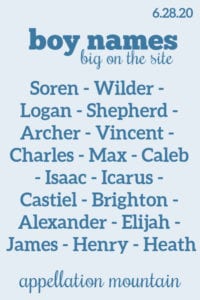