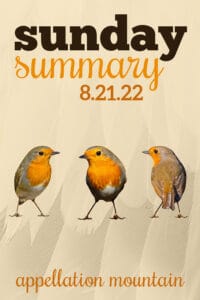 But a few years ago, I led my daughter’s scout troop while we earned our ornithology badge during the heights of 2020 stay-at-home orders. (It turns out you can do lots of bird watching in your backyard, and then report it out on Zoom.)

And so I’ve been following a bird-world controversy. Plenty of the common names we use today are problematic.

Maybe a species was named after someone who we can all agree was pretty awful.

At a minimum, though, they replaced native names for birds. Often the native names were descriptive, while the new ones? Told you little about the bird, shifting the focus to the person who named it.

So maybe all honorific names are best replaced. Were there such a bird as Abby’s Wren, wouldn’t it be better called the Black-Footed Wren?

This got me thinking about family names and honorifics in the world of naming humans, of course. Family names thrill me, and I happily chose them for my children. (With some re-inventing along the way.)

But it strikes me that honorifics work best when you can articulate the qualities of your loved one that you wish to hand down along with the name.

And even then, maybe there’s more kindness and generosity in giving your child a blank-slate kind of name?

I’m not sure I can articulate it well – not just yet – but could it be that honorifics are inherently problematic? Even when they’re freely given, with love, to honor truly wonderful people?

It’s not the same thing at all, of course – the bird-world drama is about species’ names, while I’m thinking of individual names. But there’s a thread there, maybe. Is our greatest responsibility when naming to look to the future? And if so, what’s the best decision with that in mind?

She’s turning 100 and celebrating the birth of her 100th great-grandchild. Yes, I know I just argued against family names, but I still love this choice.

Could Carson catch on for girls? I’ve been watching Amazon Prime’s A League of Their Own reboot. One of the main characters is Idaho native Carson Shaw. The creators say (mild spoilers) that Carson isn’t based on any single player. Looking at the rosters, the majority of the real-life athletes were Jean and Dorothy and Helen and Rose – very era-appropriate, as are other character names, like Greta and Maxine. Still, could the show be just enough to push Carson into wider use for our daughters?

These stories about why parents changed their children’s names are fascinating. My favorite quote: “The thing that really surprised us is we didn’t know that the kid got a vote or that they had personalities that quick … this was not just a blank extension of my wife and myself. This was a human in his own right.” (Paywall)

So what do parents change their children’s names to? Mostly we correct the spelling: Chole to Chloe, Issac to Isaac. Looking at the charts, I suspect Conner to Connor is another one. As for the author’s assertion that parents trade names falling in popularity for those on the rise? I’m less certain about that. After all, Jonathan is among the most-adopted new names. (Paywall)

I love the point Swistle makes here: “how else do we bring fresh names into usage, except by USING THEM?” Though the family opted to name their son Ignatius rather than Theseus. I love both names, and I can’t help but wonder: is Ignatius any less daring than Theseus?

Can’t get enough talk about names? Sign up for the newsletter, sent every Tuesday, chock full of fresh observations and lists you won’t see anywhere else: