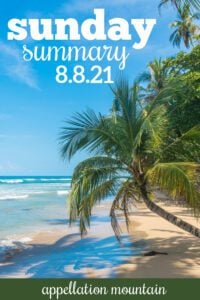 It’s funny how a name can stick with you.

In this month’s edition of Real Simple, they asked readers to share about memorable meetings with strangers while traveling. My favorite story:

In 2014, my husband and I took a trip to Costa Rica, where he proposed. On the way home, a little boy from Kentucky came up to us in the airport and entertained us nonstop with his hilarious jokes. He opened with, “My name is Ashby, and my parents say I’m obnoxious!” Five years later, we had our very own Ashby – our first child, named for our most memorable trip. – @callie_w_p

Sometimes it happens like that, right? A name we never noticed – or maybe even a name we disliked – is suddenly completely different because of a chance encounter with someone with the name. Choices like Harold and Cedric seemed completely different to me once I heard them on children.

Has anyone ever made a name completely unforgettable for you? It’s tempting to think of that one awful classmate who ensured you’d never name your daughter Greta or Matt, but I’m really thinking more of the positive examples that reshaped a name in a good way.

I’ve always been fascinated by the name Vere, but I’ve never been sure exactly how it became a name. The answers, as it happens, is here, with this aristocratic family. Born around 1679, Lady Diana de Vere married Charles Beauclerk, 1st Duke of St. Albans. (Charles was the illegitimate son of King Charles II.) The couple had twelve children – listed here – including a son named Vere. Vere became an Admiral in the Royal Navy, and passed the family name to his son, too. It’s virtually unheard of as a first in the US, but it might be a smashing middle.

Worried about using a classic or common name? Reading this might help.

I’m sure I’ve shared this 2014 article about double names before, but it’s worth another glance if you’re considering using one. The practical considerations are interesting, but the psychological part really got me thinking.

This list of offbeat classics for boys is so interesting! Partly because it’s always fascinating to see how others draw the “offbeat” circle. But also because I agree with most of these so much and I’m really glad to see Douglas on a list! Doug sounds like my dentist, but Douglas is dashing.

Another great list of boys’ names: woodsy choices for our sons. Sophie highlights a few of favorite neglected gems, including Boone.

Can’t get enough name chatter? Sign up for the weekly newsletter below, sent every Tuesday:

That’s all for now. As always, have a great week. Thinking of you! 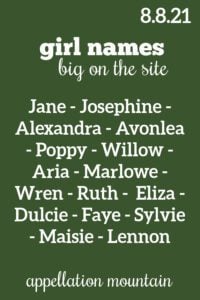 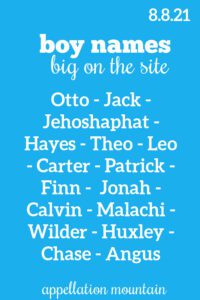