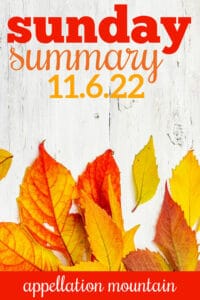 Here’s something that we often don’t anticipate, but OH how it matters.

They’re all over the name news this week.

First up, Adele surprised everyone when she announced that a fan said her name “perfectly.” It’s less uh DELL and more … uh DALE. Except there’s a little bit of a “w” quality to it, too. It reminds me of the Polish Ł. (It’s in this video at the 21:39 mark.)

Except mostly, I think, we’re hearing her accent.

Which reminded me of this:

Before you settle on a baby name, you should have people say it with with every different accent and see if you still like it. My first choice name failed the Boston accent test

I’ve come across parents who chose Alivia instead of Olivia to sidestep the potential OH liv ee ah pronunciation. A generation earlier, it was Ondrea instead of Andrea, to emphasize a preference for on DREY ah rather than AN dree ah.

And the world is filled with parents frustrated that their child’s name isn’t pronounced correctly.

But here’s the thing:

So if your aunt in Texas pronounces your daughter’s name differently? It’s probably not intentional. She might not even hear it. And you probably can’t force her to change.

Factor in languages and cultures beyond American English, and the challenge increases in complexity. Anyone who has studied another language as an adult has likely experienced those moments when you can’t quite hear something that is obvious to native speakers. Or a sound – a trilled R, maybe – that eludes us, despite lots of practice.

That said, we all owe others the courtesy of attempting to say their names correctly. It’s just that the effort counts – not the mastery.

If the difference between AH liv ee ah and OH liv ee ah is a dealbreaker for you? It’s worth considering other names.

Has pronunciation factored into your name choices? Is your own name routinely mispronounced?

How long do you have to name your baby? For Americans, the answer is not long at all …

Havoc, Lightning, Turbo, Rage. This trend in boys’ names gives me pause. I especially like the way Laura sums it up: ” … individually the names are chosen with care like any others. But taken all together, they point to an image of masculinity as dangerously volatile rather than steady and stalwart.”

If Ophelia is the new Olivia, could Olympia be the next Ophelia? It’s on this list of birth announcements from British Baby Names.

I’m finally watching Only Murders in the Building. There’s this great line when Selena Gomez introduces herself. She’s Mabel. And Steve Martin’s reaction is perfect, laughing “No, really. What is — Oh. A great old school name.” (The introductions begin at the 1:10 mark.)

Just for fun …baby name or Anthropologie bathroom accessory? Spoiler alert: weirdly, most of them are plausible in either category. (Thanks to Danielle for the find.) 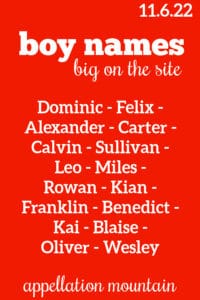 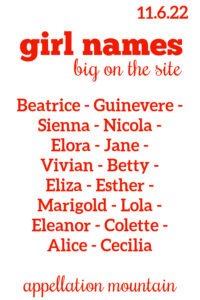