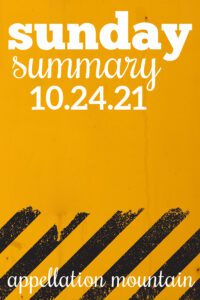 This Swistle column was all kinds of fascinating. The couple already has a son named Jack, and they’re expecting another boy. They’re stuck, they say, between Oliver and Rowdy.

My initial curiosity was about Rowdy.

It’s not exactly a name. I want to say “Rowdy Roddy Piper,” as in the former pro wrestler, known for playing the bagpipes. And the part of the villain.

For most of us, Rowdy just isn’t the right name for our child.

But this is where Swistle’s brilliance really shines through:

The “brave vs. safe” framing is unhelpful, and sets up a false choice: you have many more options than those two …

It was very much a light bulb moment for me.

When we find ourselves torn between two extremes, the answer isn’t necessarily to play it safe or take a risk.

Instead, we can view these two names as boundaries, and look for the middle ground.

Have you ever gotten stuck between a safe name and a more daring choice? How did you resolve the difference?

Game of Thrones put a few new names on parents’ radar. Now Amazon is launching Wheel of Time, a Thrones-esque epic based on a Robert Jordan series. Character names include Moiraine, Nynaeve, Leane for women; Rand, Perrin, Maksim, and Bran for men. There’s definitely a GoT sensibility to these choices, but could any of these be the next Khaleesi?

Possibly my favorite data set of the year: names analyzed by mother’s age. The topline is as expected. Younger mothers tend to choose names like Jaxson, Kayden, and Nevaeh. Meanwhile, the over-40s opt for Matthew, Beatrice, and Martha. But look a little deeper and it’s harder to explain generational differences. Why is Felicity so popular with 30 to 34 year olds? How come Henry fares well with every age group, except mothers under 25?

The number one name for girls in Austria is Marie. Somehow that seems so refreshing! Jakob is #1 for boys. More details from Nancy here.

Did you feel like your child picked her own name? I kind of get what Eve is saying. But sometimes you just get a super-strong feeling about what your child’s name should be. Why fight it?

Now this is some serious number-crunching. Did you turn to data to help choose your children’s names? Though I feel like their rules might’ve pointed to Max and Hazel without the whole reviewing-3600-names part. Maybe? It does feel like a good way to build confidence in a choice. (Oh, and they ultimately had three kids, presumably all named with this formula: Max, Clark, and Ruby.)

Looking for more name talk? Sign up for the Tuesday newsletter, chock full of names, the list of the week, and additional #namehelp questions.